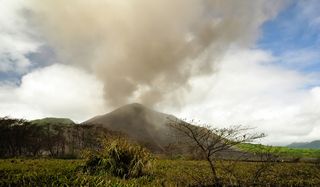 Mount Merapi in Indonesia has erupted 10 times since Oct. 26, with a new blast its biggest yet sending locals running again today (Nov. 3).

Although Mount Merapi has been quite active over the past week, it still doesn't take the record for the most active volcano in the world based on years of continuous activity.

That title would belong to Mount Yasur, an active volcano on Tanna Island that is part of the archipelago nation of Vanuatu in the South Pacific, according to Paul Kimberly, a global volcanism program manager with the Smithsonian Institution.

Yasur has been erupting nearly continuously for 111 years, oftentimes every three to four minutes. Although it may seem impossible for a volcano to erupt that much without causing constant mass panic, most of the eruptions are classified as Strombolian or Vulcanian, which are relatively low magnitude of eruption.

The volcano, one of many along the Pacific Ring of Fire, is 1,184 feet (361 meters) above sea level. Yasur has a largely pyroclastic cone with a nearly-circular summit crater 1,312 feet (400 m) in diameter. It was created by the tectonic forces that resulted from the eastward-moving Indo-Australian Plate subducting under the westward-moving Pacific Plate.

The most recent eruption occurred this past May, when a cloud billowing from Yasur rose about 6,000 feet (1,828 m) into the air and spread over about 130 square miles (340 square kilometers).

The glow of the constantly erupting volcano is rumored to be what attracted Captain James Cook on the first European journey to the island in 1774.

Today, the mountain is a sacred area for the John Frum "cargo cult ." Members of the group revere John Frum, a deified U.S. messenger who foretold the bringing of wealth to the island by American forces, and believe he resides in Yasur with his countrymen.

This article was provided by OurAmazingPlanet, a sister site to Life's Little Mysteries.