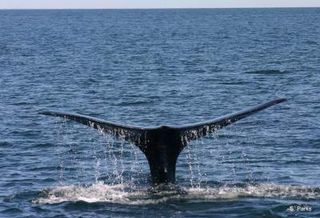 North Atlantic right whales were heard loud and clear near an old Greenland hunting ground they long ago disappeared from, a new study reports.

About 2,000 right whale calls were recorded near Cape Farewell Ground, about 250 miles (400 kilometers) east of southern Greenland. During the 19th century, these waters were a popular whaling spot, but that heyday passed as the whales vanished. The new calls confirm whales are back, but Cape Farewell Ground may only be their summer home, the study suggests.

The location and timing of the calls confirms that multiple whales were in the area, but the exact number is unknown. Their mere presence, however, is a promising discovery.

"Evidence of even a few whales summering near this former whaling ground is an important finding for this species," the researchers wrote in the study.

Cape Farewell Ground is big and has nasty weather. Rare sightings over the past 50 years suggested some whales were back. To find out if these sightings were just tall tales, the research team put recorders at five underwater sites. For one year, these recorders listened for sounds from right whales.

The monitors captured so-called upcalls. Whales make upcalls, also called contact calls, when they are alone or in the process of joining with other whales. An upcall begins low and rises in pitch, and is the most frequent call produced by right whales.

Most calls were recorded from July to November, a time when whales from North America are migrating back and forth to Europe. This migration path is cause for concern.

Cape Farewell Ground lies just north of a popular shipping route between Europe and North America. Any right whales in the region would have to dodge ships during their long migrations .

Ship strikes can be deadly for North Atlantic right whales, which are one of the rarest marine mammals in the world. Despite more than 75 years of international protection, the whales teeter on the brink of extinction. Fewer than 450 are alive today.

The new study may help fishing or cargo ships avoid whales during the summer months, the researchers said.