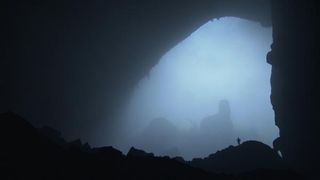 The world's largest cave passage a half-mile block of 40-story buildings could fit within it was discovered deep within a remote Vietnamese jungle in 2009.

The Son Doong cave, as it's called, measures 262 feet by 262 feet (80 meters by 80 meters) and at least 2.8 miles (4.5 kilometers) deep, making it the largest single cave passage ever discovered, according to National Geographic News, where the discovery was announced. The previous record holder, Deer Cave in Malaysia, is 300 feet by 300 feet (91 m by 91 m) in parts, but is only about a mile (1.6 km) long.

The research team exploring the cave was blocked from probing further by seasonal floodwaters. Still, they returned with spectacular pictures of the wonders inside the Son Doong cave, which was previously too intimidating to enter, even for locals that knew about it.

Aside from Son Doong and Deer Cave, other caves across the globe boast impressive caverns and tunnels .

Mammoth Cave in Kentucky, home to giant vertical shafts carved from limestone, is 390 miles (628 km) long, making it the longest set of caves in the world. The Optimisticeskaja Cave in the Ukraine is 143 miles (230 km) of spectacular gypsum, the largest cave of its kind.

How do caves form?

Caves contain some of the most amazing sites on Earth, yet caves need only two ingredients to form : rock and water.

Any type of rock that can dissolve in water will do, but generally gypsum, limestone, dolomite or even salt are most common. Rainwater will seep into the tiny pores in the rock surface, or dribble in through cracks, and the slightly acid rainwater will dissolve the rock.

Rainwater also percolates through the soil of any vegetation present and creates carbonic acid, which also slowly eats through the rock. Over tens of thousands even hundreds of thousands of years later, this dissolving of rock is what creates a cave.