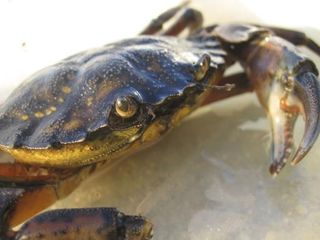 You may not be able to fight fire with fire, but fighting crabs with crabs may have some merit.

Researchers studying the imperiled marshes of Cape Cod were recently surprised to discover that a section of the marsh was coming back, sprouting a "veneer of cordgrass," according to a news release describing the study. In the places where this impressive turnabout was seen, the researchers also beheld a most unlikely cause for celebration: invasive green crabs.

Further research found these crabby immigrants were feasting upon the native marsh crab, which has overpopulated the area and eaten massive quantities of marsh grasses, leading to erosion and habitat destruction (silly marsh crabs, destroying their own eponymous environs).