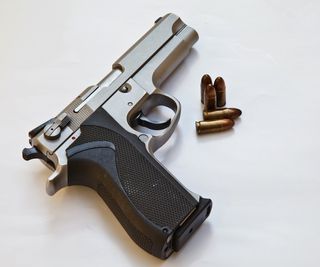 The killing of South African model Reeva Steenkamp by her boyfriend, Paralympic athlete Oscar Pistorius, brought international attention to a country known for troubling rates of violence, particularly against women. Now, new research finds the country's rate of homicide of women by intimate partners is five times the global rate.

Pistorius is being tried for the murder of Steenkamp, whom he says he mistook for an intruder in their home the night he shot her through a bathroom door. Prosecutors say the killing was premeditated.

The new study, published today (April 2) in the journal PLOS Medicine, finds that while the overall homicide rate of women has declined in South Africa, there has been no significant decrease in murders by intimate partners in a decade. Current and ex-husbands and boyfriends — as well as same-sex partners and rejected suitors — were considered "intimate partners" in the study.

There is no monitoring system for murders of women in South Africa, so Abrahams and her colleagues used data from mortuaries around the country to estimate rates in 1999. They then repeated the study in 2009.

The decade between studies saw many changes in the South African legal system, including the implementation of a domestic-violence act passed in 1998, followed by a strengthening of laws around sexual offenses in 2007, and the 2000 Firearms Control Act, which instituted gun-control measures and was fully implemented by 2004.

"Our goal was to determine if there was a shift in the number of women killed by their partners after 10 years," Abrahams said.

But there was no statistically significant difference in the rate of women being killed by their partners, which stood at 5.6 per 100,000 in 2009. That's more than double the rate of two women per 100,000 seen in the United States.

Gun control appears to have had an effect on the femicide rate, Abrahams said, with the proportion of gun-related homicides decreasing from 33 percent in 1999 to 17 percent in 2009. But the study suggests a need to do more, particularly in investigating instances of domestic violence before a murder happens, the researchers wrote. Most women killed by a partner in South Africa had been in long-term abusive relationships, Abrahams said.

"Most importantly," Abrahams said, "we need to put most of our efforts into prevention."