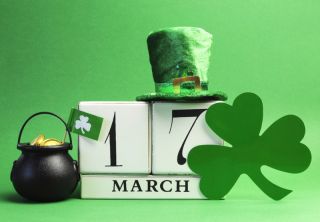 Every year on March 17, millions of people gussy themselves up in green attire, hold big parades and drink lots of beer, all in the name of an old Irish saint. But what's the history of this emerald-hued holiday, and why do we celebrate it with shamrocks and alcohol?

Who was St. Patrick?

St. Patrick was a Christian missionary, bishop and a patron saint of Ireland. He was born in Roman Britain to a wealthy family near the end of the fourth century. At age 16, he was captured by Irish raiders and brought to Ireland, where he spent six years in captivity, working as a shepherd. He became a devout Christian and, it's believed, began to dream of converting the Irish to Christianity. He then escaped back to England. He wrote that a voice — God's — spoke to him in a dream telling him to leave Ireland.

After reaching England, Patrick described having a second dream in which an angel told him to go back to Ireland as a missionary. He started religious training to become a priest. He was later sent to Ireland on a mission to convert the Irish to Christianity and minister to Christians already there. Rather than replacing pagan Irish rituals, he incorporated them into his teachings. For instance, the Irish used to honor their gods with fire, so Patrick used bonfires to celebrate Easter. He died in A.D. 461 on March 17, which became St. Patrick's Day.

Wearing green has become a staple of St. Patrick's Day, but the holiday was originally associated with the color blue. It's thought that the shift to green happened because of Ireland's nickname "The Emerald Isle," the green in the Irish flag and the shamrock, or clover. Green ribbons and shamrocks were worn as early as the 17th century. During the Irish Rebellion of 1798, an uprising against British rule in Ireland, Irish soldiers wore full green uniforms on March 17 to make a political statement. Legend has it that wearing green makes a person invisible to leprechauns that will pinch someone if they see them. [Image Gallery: One-of-a-Kind Places on Earth]

In Ireland, some people still adhere to the tradition of Catholics wearing green and Protestants wearing orange, the colors that represent their respective religious sects on the Irish flag.

Where the shamrock came from

According to folklore, St. Patrick used the shamrock, the familiar three-leafed clover, to explain the Christian Holy Trinity. The word "shamrock" comes from the Irish word "seamróg," meaning "little clover." It is the symbol of Ireland, and wearing and displaying shamrocks has become a widespread practice on St. Patrick's Day.

Why so much beer?

Beer is one of the most widely consumed beverages on St. Patrick's Day.

While the Irish beer Guinness remains a top St. Patty's Day choice, a disturbing trend is the consumption of green beer, dyed with food coloring. Some studies have linked food coloring to cancer (at least in lab animals) and headaches, though revelers would probably have to drink a lot more dye than the beers contain to cause health problems, according to nutrition expert Keri Glassman, founder and president of a nutrition practice based in New York City.

It's no surprise that imbibing beer or other alcoholic beverages affects brain function, and a new study helps reveal what's going on. The ethanol in these drinks disrupts connections between the brain's visual and motor areas, hindering muscle coordination, a recent study found.

Celebrations of St. Patrick's Day would not be complete without parades, festivals and Céilithe, a social gathering that typically involves Gaelic folk music and dancing. Céilithe, also known as Céilidh, has its origins in Ireland and Scotland, but has spread with the Irish and Scottish diasporas.

Many cities hold parades in honor of the holiday. The New York City St. Patrick's Day Parade is the largest parade in the world. It was first held in 1762, 14 years before the Declaration of Independence, by a group of homesick Irish expats and soldiers who served with the British Army in the American colonies, according to the parade's website.

The world's shortest St. Patrick's Day parade is held in the Irish village of Dripsey. It lasts only 100 yards, spanning the distance between the village's two pubs.