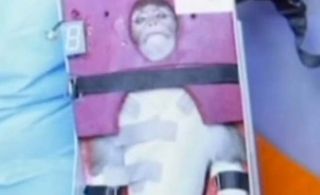 A gray rhesus macaque made history yesterday (Jan. 28) when the primate reportedly flew into space in an Iranian mission. It also became part of a long line of animal astronauts.

But since science has proved time and again that humans can survive the extra-terrestrial trip, why do countries bother sending monkeys and other living creatures up into space at all these days?

In the case of Iran, the demonstration is "more of a show," said Kenneth Halberg, a researcher at the University of Copenhagen who studies aquatic bugs' ability to survive spacelike conditions. "There's nothing new about sending a monkey in space."

But sending other animals into space can provide valuable scientific lessons for interplanetary travel and space greenhouses, he said. [Animals in Space: 10 Beastly Tales]

At the beginning of the space race, countries sent chimpanzees, dogs and rabbits into space as testers. Scientists believed that if the hapless animals could survive the weightlessness, the extreme speeds and the rapid acceleration, then humans had a fair shot as well.

But since then, more than 500 people have traveled to space, and space tourism isn't too far away from becoming mainstream. So testing the survivability of short-term space travel for humans is not a pressing scientific concern, Halberg said. [Photos: The First Space Tourists]

Of course, not all space-based animal experiments have fundamental scientific value, said Nathaniel Szewczyk, a biologist at the University of Nottingham who has studied 24 generations of nematodes in space.

"At times it's a bit difficult to see the value. Often you have high-school students that are doing experiments and they get billed as science," Szewczyk said. And for a price, a Texas-based company called NanoRacks will send scientists' projects up to the International Space Station, Szewczyk said.

Instead, animal experiments in space can provide insights into the dangers of longer voyages, such as interplanetary or interstellar travel for extraterrestrial colonization.

The nearest star, for instance, is 4 light-years away, and it would take four years to travel to Mars to set up a colony, Halberg said. A light-year is the distance light will travel in a year, or about 6 trillion miles (10 trillion kilometers).

"Right now it's really science fiction, but we need to understand how organisms respond to these space conditions," Halberg told LiveScience.

During that time, a space capsule wouldn't completely insulate life from bombardment with cosmic radiation, zero air pressure and cold temperatures. Earth-based experiments can't simulate all of those conditions, particularly the heavy particle radiation, he said.

"This is potentially the biggest killer, because these particles have so much energy they can destroy DNA molecules," he said.

To that end, Halberg studies how a water bug called a tardigrade can withstand spacelike conditions. The water bugs dehydrate and go into an extreme hibernation with zero metabolism, he said, thereby withstanding the punishing radiation, desiccation and frigid temperatures of space.

Animal experiments can also reveal how changes across the life span may translate to other species, from earthworms all the way up to humans, Szewczyk said.

For instance, nematodes and humans show similar changes in the expression of genes that regulate blood sugar, Szewczyk said.  But because they are more compact and reproduce quickly, scientists can study a lot of them across an entire life span, unlike humans.

Once humans get to another planet, we would need to find a way to stay alive. Sending a space greenhouse full of fruits, vegetables and pollinating insects may be one way for humans to feed themselves on a Mars mission.

But pollinators, for instance, could be confused by the zero pressure or weightless environment of space. And fruits and vegetables may not have the same life cycle in space, Halberg said.

"All organisms on Earth have adapted to a gravitational pull of one atmosphere, so if we change that, how do the organisms respond?"