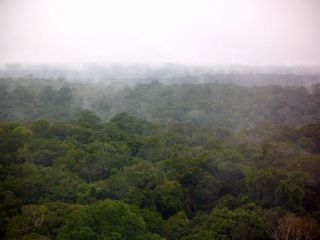 A battle is looming between one of South America's largest state-backed oil companies and an indigenous community of about 400 in the Ecuadorian rainforest.

The area is near Yasuni National Park, in eastern Ecuador, home to some of the richest variety of life on Earth. Studies have shown that a single hectare here contains a wider variety of life than in all of North America.

The state-backed company, Petroamazonas, has told the Kichwa tribe that they plan to begin prospecting for oil tomorrow (Jan. 15) in the area, the Guardian reported. But the tribesmen say they are ready to die fighting to protect their land, which covers some 270 square miles (700 square kilometers) of pristine rainforest, an area about four times the size of the District of Columbia.

The community secretary, Klider Gualinga, told the Guardian that more than 80 percent of the village opposes the oil deal, but that a small minority is pushing it through against their wishes and local rules.

"People think it is dishonest and the oil company is treating them like dogs. It does not respect the land or the planet. There is no deal, nothing is agreed. The people do not want the oil company," Gualinga said. "We have decided to fight to the end. Each landholder will defend their territory. We will help each other and stand shoulder to shoulder to prevent anyone from passing."

The community decided to reject an offer from the company late last year because they were concerned about the long-term environmental impact of mining, the Guardian reported. But the village recently learned that their chief signed a deal to allow the mining, despite not being granted approval.

Earlier offers of a brand-new school, guaranteed college education of children and improved healthcare were dropped in the document, which promises only $40 per hectare, the Guardian reported.

The villagers stand no chance against Petroamazonas, which is backed by the Ecuadorian military, according to news reports.

Members of the community have started a last-ditch legal effort stop the company, and are being helped by a British businesswoman who is married to the village shaman and who was recently made the head of a local eco lodge (a facility for tourists interested in ecologically-friendly travel), the Guardian noted.

Yasuni National Park, near the tribe's land, is also home to two of the world's last uncontacted tribes. Other tribes without exposure to the outside world likely exist elsewhere in the Amazon, researchers believe.