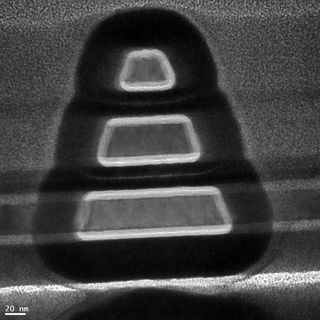 The three nanowires are progressively smaller, resulting in a cross-section that is shaped like a Christmas tree.
(Image: © Purdue University.)

A new type of ‘4-D’ transistor could represent a big advance for the semiconductor industry. The transistor contains three nanowires made from indium-gallium-arsenide (InGaAs), as opposed to silicon. The three nanowires are progressively smaller, resulting in a cross-section that is shaped like a Christmas tree.

InGaAs is a semiconductor made of indium, gallium and arsenic, and is being investigated as an alternative to silicon that could allow for smaller transistors.

The NSF-funded researchers built on previous work in which researchers created 3-D instead of flat transistors. Their approach could lead to faster, more compact and efficient integrated circuits and lighter laptops that generate less heat.

The researchers from Purdue and Harvard universities showed how to improve device performance by linking 3-D transistors vertically in parallel. "A one-story house can hold so many people but, more floors, more people; and it's the same thing with transistors," said Peide "Peter" Ye, a professor of electrical and computer engineering at Purdue. "Stacking them results in more current and much faster operation for high-speed computing. This adds a whole new dimension, so I call them 4-D."