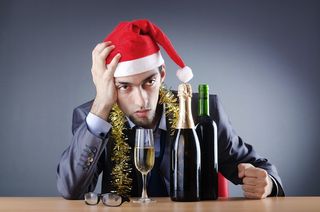 Should have had another glass of water.
(Image: © Elnur , Shutterstock)

It's the end of the year, the season of holiday parties and champagne toasts at midnight, not to mention a pounding head come morning.

Yes, over-imbibing and hangovers go together like vodka and cranberry juice, despite dozens of folk remedies meant to allow headache-free fun. The real driver of a hangover is alcohol-induced dehydration, and the only true-blue cure is to steer clear of the adult beverages. But there may be a few tips and tricks you can deploy to make New Year's Day bearable — or at least distract you from your aching head.

The main reason your head pounds after too much alcohol is dehydration. Your liver works overtime while you're partying to clear alcohol's toxins from your system; meanwhile, alcohol prompts your kidneys to produce more urine, making you pee more fluid than usual. Once you're dehydrated, your body can't flush out all those toxins your liver has been busily filtering. In addition, alcohol can irritate your stomach lining, causing nausea, according to the Mayo Clinic; it can also disrupt your sleep cycle, leading to grogginess.

Your aching head may be caused, in part, by alcohol expanding your blood vessels and otherwise promoting inflammation. Compounds called cogeners, which are byproducts of fermentation, can worsen a hangover. Darker liquors have more cogeners than light ones, meaning that a night of quaffing bourbon may leave you in more pain than too many vodka shots.

Still, any alcohol will do. According to a study published in March 2010 in the journal Alcoholism: Clinical & Experimental Research, bourbon drinkers felt worse than vodka drinkers the next day, but both groups slept about the same and neither did any worse on tricky cognitive tasks.

Hydration (and a full stomach to slow alcohol absorption) can protect you from morning-after woes on party night, Aaron Michelfelder of the Loyola University Health System told LiveScience last year. Following each alcoholic beverage with a glass of water will help keep your body's toxin-flushing system chugging, Michelfelder said. Ideally, it will also slow you down; Michelfelder recommended no more than five drinks for men and three for women in a three-hour period.

Be aware that the drink you order at the bar is not the same as the drink that public health researchers talk about. A pint of beer, for example, is 4 ounces more than a 12-ounce serving of regular beer. Microbrews and ice beers that are higher in alcohol may also pack more than a single "drink" even in a 12-ounce glass. [10 Intoxicating Facts About Beer]

A standard 1.5-ounce shot of liquor is a drink, but most cocktails boast at least a couple of shots. That one margarita may be a couple of drinks, or even three.

A recent study suggests that downing a mess of asparagus leaves (the part no one eats) may counteract the toxic effect alcohol has on the liver. However, the study, published in 2009, treated human and rat liver cells with asparagus extracts rather than having actual drinkers go on an asparagus binge, so the real-world applicability of this preventative measure remains unknown.

If moderation isn't in the cards, you're probably going to have some discomfort. Only about 23 percent of people are genetically resistant to hangovers, according to a 2008 study published in the journal Current Drug Abuse Reviews. The rest will have to make do with sketchy pills, none of which have been shown to work, and rest and rehydration.

"After you drink too much and wake up with a hangover, the most important thing is rehydration," Michelfelder said. "Drink water or drink Gatorade; either is fine."