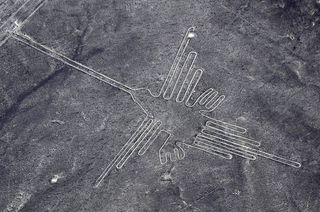 The animal mounds were found in a region famous for a series of ancient geolyphs, called the Nazca Lines, which are now considered a World Heritage Site in the Nazca Desert in southern Peru. Here, Nazca Lines resembling a humming bird, as viewed from a plane.

Some of the Nazca Lines, mysterious geoglyphs that span a vast swath of the rugged Peruvian desert, may have once been a labyrinth with a spiritual purpose, a new study suggests.

The new insight, published in the December issue of the journal Antiquity, came because two archaeologists decided to use a decidedly low-tech method to understand the sand drawing's ancient secrets: by walking it.

At the time the Nazca Lines, which span 85 square miles (220 square kilometers), were drawn, "people were not looking at this stuff from the air, they were looking at stuff from the ground level," said Timothy Ingold, a cultural anthropologist at the University of Aberdeen, who was not involved in the study. "To appreciate what they might have meant to ordinary people, then you have to walk them."

While that seems like an obvious first step, in actuality, very few archaeologists have studied the Nazca Lines from that vantage point, because most of the pictures drawn out by the lines are only visible from foothills above or from space. ['Nazca Lines': Aerial Photos Reveal Mysterious Stone Structures]

The Nazca Lines have been a mystery since they were first discovered in the 1920s by Peruvian archaeologist Toribio Mejía Xesspe. Long-forgotten people from the Nasca culture created the drawings between 200 B.C. and A.D. 500 by brushing away the dark top layer of barren desert to reveal the light, sandy soil underneath, wrote Clive Ruggles, an archaeologist from the University of Leicester in the United Kingdom, in an email. The dry, windless climate has preserved most of the carvings — hundreds of depictions of animal shapes such as jaguars and monkeys, as well as geometric designs — to this day.

But just why ancient people created the Nazca Lines has been an enduring mystery: Some archaeologists have suggested it was an alien landing strip, a primitive sun calendar, or an irrigation system.

"There is no simple answer. Different geoglyphs were clearly created over a significant period of time and almost certainly had a variety of meanings and purposes," Ruggles wrote.

Concerns about degradation of the mysterious geoglyphs prevented most traffic through the region since the 1990s. But when Ruggles and Aberdeen colleague Nicholas Saunders came upon a previously undiscovered set of lines north of the Nazca desert in 1984, they wondered whether the geoglyphs might reveal their secrets from a more terrestrial point of view.

Starting in 2007, Ruggles and Saunders spent 150 days walking 932 miles (1,500 kilometers) of the ancient carvings. They found the newly uncovered geoglyph was a single line that radiated out in a mystifying, confusing pattern, with a series of sharp, disorienting turns leading up to a mound whose purpose remains unknown. What's more, the meandering line was in pristine condition, leading the archaeologists to conclude that the paths that were carved out were rarely, if ever, used.

Many labyrinths have a spiritual purpose, so one possibility is that the paths weren't walked at all, but instead were intended for the passage of gods or spirits, Ruggles wrote. For instance, in the 5th century B.C. Herodotus mentions a vast Egyptian labyrinth that served as a mortuary temple, while the Hopi indians saw labyrinths as symbols of Mother Earth.

"We still have absolutely no idea what these people were doing or what the point of it was," Ingold said.