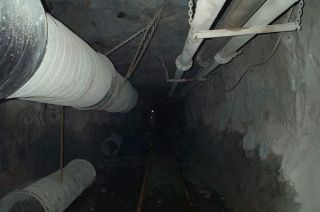 The dark shaft of the Mponeng mine in South Africa where microbes were found flourishing in rocks up to several miles below the Earth's surface.
(Image: © Duane P. Moser, Desert Research Institute)

"I wish they all could be California microbes," is not something that the Beach Boys sang. But perhaps they should have.

A shadowy microbe first found 2 miles (3.3 kilometers) beneath South African soil has turned up in California, on the other side of the planet, as reported by The New Scientist.

The microbe, known as Desulforudis audaxviator, was originally detected in water deep within a South African gold mine. It was the only organism found in the area, leading some to label its home as an "ecosystem of one."

Studies found that it relies only on hydrogen and sulfide for food, derived from the breakdown of uranium and other radioactive elements. It has somehow evolved to do without the sun or oxygen.

Now, a project to map Earth's deep biosphere called the Census of Deep Life has found DNA 99 per cent identical to that of D. audaxviator, according to The New Scientist. It was detected in bore holes 2,950 feet (900 meters) beneath the surface of California's Death Valley.

"We're reasonably sure we're looking at the same bug," said Duane Moser, a researcher at the Desert Research Institute in Las Vegas, according to the New Scientist.

But how did it get so far away? Scientists suggest it could have made its way to the surface in the mine's water, and hitched a ride around the world on currents of air. Or it could have traveled via underwater rivers, although this would have had to happen before the continents split apart, according to the publication.

Recently, scientists have lowered their estimates of the number of microbes that they expect live deep underground. One landmark study from 15 years ago estimated that subseafloor sediments contain 35.5 x 10^29 microbes (that's 1 followed by 29 zeroes). But a follow-up study published Aug. 27 in the journal Proceedings of the National Academy of Sciences  estimates that there are a mere 4.1 x 10^29 microbes under the sea, more than eight times less than previously thought.