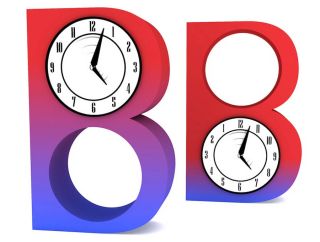 In this illustration, two different B mesons are changing between states (represented as colors); however blue-B changes into red-B more quickly than red-B changes into blue-B (a process running in reverse-time, as shown by the backwards clock dial).
(Image: © Greg Stewart, SLAC National Accelerator Laboratory)

Subatomic particles don't care if time moves forward or backward — it's all the same to them. But now physicists have found proof of one theorized exception to this rule.

Usually, time is symmetrical for particles, meaning events happen the same way if time progresses forward or backward. For example, a video of two particles colliding and scattering off each other can be played forward or backward, and makes sense either way. (That's not the case for macroscopic objects in the real world. You can spill a glass of milk on the floor, but if time were to move backward, the milk can't pick itself up and fall back into the glass.)

However, physicists thought there might be cases where time wasn't symmetrical for particles either — where certain events worked with time flowing in one direction and not the other. Now, for the first time, they've found proof of this phenomenon.

Researchers working on the BaBar experiment, which ran from 1999 to 2008 at the SLAC National Accelerator Laboratory in California, analyzed nearly 10 years of data from billions of particle collisions. They now report that certain types of particles change into one another much more often in one direction than they do in the reverse, confirming that some particle processes have a preferred direction in time.

"It was exciting to design an experimental analysis that enabled us to observe, directly and unambiguously, the asymmetrical nature of time," BaBar collaborator Fernando Martínez-Vidal, a physicist at the University of Valencia in Spain who led the study, said in a statement. "This is a sophisticated analysis, the kind of experimental work that can only be done when an experiment is mature."

The particles in the experiment were B mesons, which are made of one quark and one antiquark (the antimatter partner of a quark) in the "bottom" flavor. B mesons can flip between two different states called B-zero and B-even, and the BaBar data show that these transformations happened six times more often in one direction than in the other.

Previous attempts to look for time asymmetry were not direct, because researchers were unable to disentangle time asymmetry from other asymmetries involving charge and parity (a particle characteristic akin to left- or right-handedness).

In the new study, scientists harnessed the power of quantum entanglement, in which two particles can be connected so that an action on one reflects in the other. Using this phenomenon, the scientists were able to measure one B meson and acquire information about another particle at the same time.

"In the past, a true test of time-reversal symmetry with unstable particles was considered to be impossible," said BaBar associate José Bernabéu, also at the University of Valencia. "It's spectacular that the solution came from the same entanglement phenomenon used for quantum communication and computing."

The discovery was reported this month in the journal Physical Review Letters.