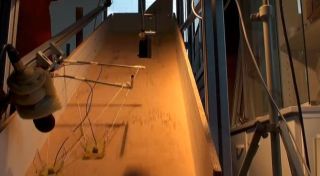 Researchers recorded sand "singing" in the lab. It can make multiple notes at the same time, a consequence of different-sized grains moving at different speeds.
(Image: © American Geophysical Union)

In a few places on Earth, sand "sings" as it falls down dunes, making a low droning sound that lies within the bottom half of a cello's musical range.

For centuries the eerie humming in deserts mesmerized visitors such as explorer Marco Polo and scientist Charles Darwin, who couldn't explain the origin of the sound.

Scientists suspected they were hearing vibrations in the subsurface layers of the dunes. In 2009, however, University of France researchers found that the sound is created by vibrations of the sand grains that avalanche down the dunes.

In a new study to be published Friday (Oct. 26) in the journal Geophysical Research Letters, those French scientists tackle another mystery: How can singing sands create multiple notes at the same time?

To answer that question, the scientists studied sound produced at two different dunes: one in the Saharain southwestern Morocco, and one near Al-Askharah, a coastal town in southeastern Oman, on the Arabian Peninsula. [Hear the singing sand dunes.]

In Morocco, the sands consistently produced a note at 105 Hertz, in the neighborhood of the G-sharp two octaves below middle C, according to a release describing the study. The Omani sands also sang, but sometimes belted out a cacophony of almost every possible frequency from 90 to 150 hertz, or about F-sharp to D, a range of nine notes.

One difference between the dunes stuck out: While the Moroccan grains were of a relatively uniform size, the Omani sand grains were all over the place. Researchers then isolated grains of different sizes and recorded the sound they made moving through the air in a laboratory setting.

They concluded the notes produced by the sands depend upon the size of the grains and the speed at which they whistle through the air.

But scientists still don't understand how the erratic motion of flowing grains translates into sounds coherent enough to resemble musical notes, according to a release on the research.

Their hypothesis is that the vibrations of flowing sand grains synchronize, or vibrate at the same frequency, leading the mass of sand grains to vibrate in unison. These thousands of small vibrations combine to push the air together, like the diaphragm of a loudspeaker.

"But why do they synchronize with each other?" study author Simon Dagois-Bohy said in a statement. "That's still not resolved."