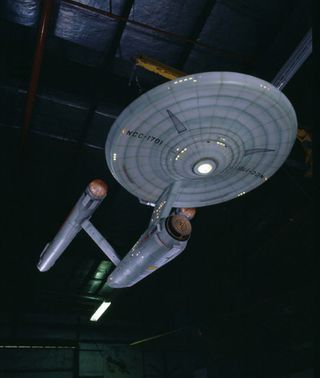 This model of the fictional starship Enterprise was used in the weekly hourlong “Star Trek” TV series that aired September 1966 to June 1969.
(Image: © National Air and Space Museum)

Contemplating the idea of a manned voyage to another star raises many confounding questions, including one that has been around since the days of the first travelers: What to pack?

To build a closed environment that can sustain astronauts and perhaps their descendants during the long mission is going to require many kinds of technological innovations, some of them needed just to clothe the interstellar travelers, said Karl Aspelund, a professor of textiles, fashion merchandising and design at the University of Rhode Island.

"The longest time anyone has been in space is around 400 days. Now we're suddenly talking years, decades, possibly even generations," Aspelund said last week at the 100 Year Starship Symposium in Houston, a conference about interstellar space travel. "That changes everything."

An interstellar mission is most likely going to be a very extended trip, considering the nearest stars are light-years away. Aspelund estimated that every person aboard a ship on a 30-year voyage would need to pack about 100 cubic feet of clothing. For 10 people, that means enough clothes to fill a railcar. Based on current launch costs, so much mass could add $18 million to $36 million to the price tag for the mission simply for shirts, pants and underwear, he calculated. [Spacesuit Suite: Evolution of Cosmic Clothes (Infographic)]

Clearly, future astronauts will have to pack lighter.

Aspelund is only half joking when he contemplates sending spaceflyers onto a starship naked. He concedes there are good reasons ― culturally as well as individually ― why humans couldn't just discard clothes on an interstellar mission.

But researchers will need to find ways for clothes (and everything else astronauts pack) to be used sustainably, he says.

So far NASA hasn't figured out many good ways to do laundry in space. Astronauts on the International Space Station have been known to rarely change outfits.

"It's basically a flying dorm room, by the sound of it," Aspelund said of the space station. "The solution to keeping things clean is exactly the dorm room solution: You stuff it into a hole and you never see it again. That's not so good if you're not going to be coming back, or if you're going to be out there for years."

Aspelund plans to write a grant and collaborate with other researchers on the issue of cosmic duds and space laundry. The solutions may require completely different types of textiles that are more durable and recyclable, or new ways to clean existing materials.

"We have things that are absolutely critical to our well-being on the planet," Aspelund said. "This project, the 100 Year Starship, inspires a completely fresh look. Suddenly we step back from Earthly concerns."

This story was provided by SPACE.com, a sister site to LiveScience.Follow Clara Moskowitz on Twitter @ClaraMoskowitz or SPACE.com @Spacedotcom. We're also on Facebook & Google+.