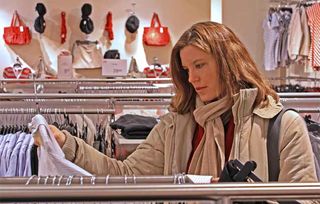 Both women and men are afflicted by compulsive buying, which can lead to financial ruin.
(Image: © Dreamstime.com)

The stereotypical shopaholic darting from store to store to pick up anything and everything while racking up a hefty credit-card bill is anything but stereotypical. They come in all shapes and sizes.

New research reveals while some super-shoppers spend to boost self-esteem and band-aid other perceived internal deficits, others' carts are driven by plain-old materialism. Whatever the motivation, however, researchers mostly agree that buying behaviors can range from frivolous fun to serious addiction.

And, it seems, over-shopping is on the rise.

Compulsive buying can be thought of as a chronic tendency to purchase products far in excess of a person’s needs and resources.

"There are some people who are just total rational consumers; they buy what's on sale, or what they need and nothing else," said researcher James Roberts of Baylor University's Hankamer School of Business in Texas. "On the other end, there are compulsive shoppers who buy to their own financial ruin and to relationship problems and other kinds of debt; and then there's the rest of us somewhere in between."

Part of the problem, experts say, is that compulsive shopping is often viewed favorably rather than being treated as a problem.

Some researchers have likened compulsive buying to other addictive behaviors that individuals use to escape life to the point where that behavior controls the person rather than vice versa.

"When it becomes our natural response to bad feelings or bad events in our life, to go shopping as a kind of retail therapy, it can really become a problem," Roberts told LiveScience.

The consequences of compulsive shopping are far-reaching and could outlast the trendy pair of shoes or digital device you just purchased. These include massive credit-card debt, spoiled relationships, work problems and depression and anxiety, according to the Illinois Institute for Addiction Recovery.

Some excessive spenders cover up debt or purchases — similar to an alcoholic hiding bottles — which can strain once-honest relationships.

"They suffer a lot because of the emotional drain of being in debt and wondering what's going to happen, carrying these huge credit-card balances that go up and up and up," said Stanford University psychiatrist Lorrin Koran. "It can cause a lot of suffering and family dysfunction, because there are arguments about, 'Why are you buying these things you don't use?; why are you spending this money?'"

Koran recalls some of the compulsive buyers in his research declaring bankruptcy and getting divorced over their buying disorder. One woman was within weeks of losing her house.

Although the consequences can be "quite severe," Koran says the so-called impulse control disorder is treatable and urges those afflicted to seek psychiatric help.

The results of a telephone survey by Koran and his colleagues of more than 2,500 people, detailed in a 2006 issue of the American Journal of Psychiatry, showed that an average of nearly 6 percent of the U.S. population fits the compulsive-buyer build. They found the spending problem afflicts men and women at about the same rate.

Other estimates for the prevalence of compulsive buying range from a low of 2 percent to 12 percent or more of the U.S. population, Roberts said.

The murky stats on super-shoppers can be blamed on the vague criteria for diagnosing the condition and the associated scales put forth to measure it.

"Measuring compulsive buying is not a straightforward process, yet the ability to accurately measure it is important if researchers are to clearly understand and perhaps predict this growing consumer phenomenon," Roberts wrote in the February issue of the Journal of Economic Psychology.

To learn more, Roberts and Chris Manolis of Xavier University in Ohio surveyed 406 college students with an average age of 19 and evenly split between males and females. Students responded to questions about compulsive buying, credit-card misuse, attitudes toward money, materialism and consumption as a way to gain status.

"We found that the people who are classified as compulsive buyers under the Faber and O'Guinn scale, the most commonly used scale, seemed to be motivated by internal drivers, things like low self-esteem," Roberts said.

However, this scale tended to sort people into extremes — either you are a compulsive buyer or you aren't. "I think we'd do better to have people on a continuum," Roberts said.

The Edwards Scale, a second approach, did indicate compulsive buyers along a continuum, though the scale picked out individuals driven more so by materialism and other external motivations such as great sales pitches or advertising.

Elizabeth Edwards, a professor of marketing at Eastern Michigan University who created the Edwards scale, says she didn't measure materialism or other external motivations and thus her scale doesn't "pick out" individuals driven by materialism. Instead, Edwards pointed out, her scale measures a tendency to compulsively buy rather than the behavior itself.

The overwhelming urge to splurge has been likened to other addictions, though compulsive buying currently is not recognized as a distinct disorder by the American Psychiatric Association.

"[Compulsive buyers] have usually fairly irresistible impulses that they can't control, and it leads to some kind of harm, either financial or occupational or interpersonal or some combination," said April Lane Benson, a psychologist in New York who treats compulsive buyers, and the founder of Stop Overshopping, LLC.

She added, "It's like having an itch and they have got to scratch it. And they don't realize that just like an itch, if they don't scratch it sooner or later the itch will go away."

Benson describes a typical client as a woman who has been buying things such as jewelry, clothing and shoes for years, and for one reason or another decides she needs to deal with this addiction. "They come to me maybe because they decide they have a long-term goal they're never going to meet if they don't deal with this addiction. They want to buy a house, or they want to have a baby, or their husband finds out," Benson said.

Like other addictions, shopping fills some kind of void. In past research, marketing professor Edwards found that compulsive buyers who took part in a 12-step program called Debtors Anonymous also had certain personality types compared with the general population. They tended to have low self-esteem, a tendency toward fantasizing and to be vulnerable to depression and high anxiety.

"Going out and buying a whole bunch of stuff makes you feel better about yourself. Some might argue it's really just an attempt to bolster your self-esteem," Edwards said in a telephone interview. "Unfortunately, it probably doubles back on itself and causes you to have higher anxiety and lower self-esteem if it gets out of hand when you're a compulsive buyer."

Edwards didn't find links between compulsive buying and income or gender, suggesting that both men and women are susceptible to spend uncontrollably regardless of their funds.

The prevalence of excessive purchasing is on the rise, thanks to society's focus on everything material, Roberts thinks, based on his research and a review of others' past research.

And whereas a slurring drunk or addict at the extremes is a no-no, a gal on a spending spree is commonly seen as a reason for applause.

Benson helps her clients deal with the emotional and practical aspects of this disorder. In addition to finding the root cause of the overspending, individuals are guided in making a spending plan and preparing for what Benson calls high-risk situations that might trigger a relapse.

"It's important to understand what you're really shopping for, what are the underlying authentic needs — Are you shopping because you're lonely? Are you shopping to celebrate? — and finding other ways to meet those important needs," Benson said.