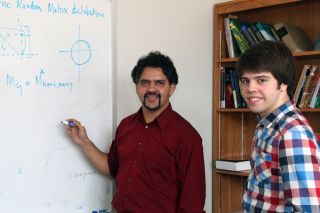 Yogesh Joglekar, assistant professor of physics at Indiana University-Purdue University Indianapolis, works on graphene and optical waveguides with balanced loss and gain, two of the hottest fields in theoretical physics. In addition, he mentors a growing number of high school and undergraduate students who are carrying out original research that is published in top-tier physics journals. A National Science Foundation CAREER grant supports his graphene research and mentoring.

When I joined the physics department in the School of Science at IUPUI in 2005, graphene had just been discovered, and I couldn’t wait to start theoretical research on it. It is fascinating that such a day-to-day material — pencil lead — serves as a prototype for testing exotic quantum field theory predictions and will also lead to new device applications within the next decade.  It’s very exciting to be working in a field that has recently been recognized with a Nobel Prize.

My second research area is open systems with sources and sinks, such as light traveling in a medium with loss and gain. These systems are called ‘PT-symmetric lattice models’. A high-school student working with me in this field obtained some very intriguing predictions. As we tried to understand them, I realized that this is an ideal area to involve young students in high-level, original research.

The inventor Thomas Edison said, "Success is 10 percent inspiration and 90 percent perspiration.” The best career advice I received was from my graduate advisor Allan MacDonald who paraphrased Edison a bit, and told me that “Success in research is ninety percent perseverance, five to seven percent inspiration, and the rest is luck.”

The first ‘cool experiment’ I did as a child was a science project where my friends and I filled glass-beakers with different liquids to create lenses with different magnifying powers. We were all about 14 years old and couldn’t believe we could make magnifiers out of things like water and oil and use them to focus sunlight and start a fire.

Being a researcher at IUPUI allows me to explore questions that I find interesting and to discuss the questions and their possible answers with novices — high school, undergraduate and graduate students — and experts alike. The thrill of that (occasional) insight and of understanding something deeply and perhaps differently is my favorite part of the job.

An effective researcher usually needs to have a combination of curiosity, the desire and ability to follow through, and a certain level of objectivity that is necessary to evaluate your results.  Enthusiasm, a sense of humor, and good communication skills are also important!

The graphene research explores the possibilities of electric current flow without resistance and the production of a laser-like light via excitonic condensation. My research on PT-symmetric lattices explores the control and manipulation of the motion of light. Both of these studies lead to a deeper understanding of the flow of electric charges and electromagnetic waves, which is necessary — but not sufficient — for designing new electronic and optical materials.

An equally important benefit of theoretical physics research, particularly for young students, is that it teaches them critical thinking, model building and carrying out reality checks on their results. These skills are applicable to and required in any STEM discipline and beyond. Many young students remain interested or become interested in pursuing science careers as a result of hands-on research. So an important societal benefit of our research is that it is putting some bright students on paths to careers in science and encouraging others to be science literate in whatever fields they pursue.

Richard Feynman, one of the greatest teachers and a physics Nobel winner, has influenced me greatly over the past two decades. When I was in high school, I read ‘Surely You’re Joking, Mr. Feynman!’ and it solidified my decision to pursue physics. His intellectual abilities were exceptional. His curiosity and the drive to understand the world around him were superlative and so was his desire to convey the understanding of physics to the public at large. He was equally passionate about explaining subtle quantum physics and the effect of cold on O-rings, like those that doomed the Challenger space shuttle. He heavily influences my research, particularly when working with young students, and my teaching.

People usually think that research in theoretical physics requires graduate level training. They are surprised to learn that, given the right problems, even high school students can produce original work. The youngest student co-author in my group is a 13-year-old; we have had four other high school student co-authors on two different papers. This involvement of young students in high-level research is a surprise to most people. When people hear the term “theoretical physics” they more often think of scientific genius rather than a high school or undergraduate student.

Being a theorist, most of the important stuff is in my head. So I would just go back for thank-you gifts from my students including an XKCD web comic poster!

I grew up in Mumbai (Bombay) with Marathi as my native language; I went to IIT Kanpur where Hindi was the primary language, and then came to the US where English is the main language. So my music is an eclectic collection across these three languages. I am especially partial to classical (both Indian and Western) and classic rock.