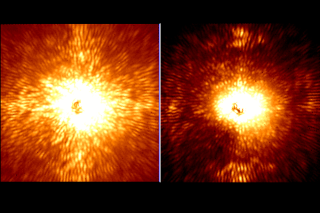 Although hundreds of planets are known to orbit other stars, it’s extremely difficult to see them directly in an image. This is largely because the light that stars emit is tens of millions to billions of times brighter than the light given off by planets, blinding astrophysicists who are searching for new worlds.

But an advanced telescope imaging system that started taking data last month in the Hale telescope at the Palomar Observatory in California is changing that. The collaborative set of high-tech instrumentation and software, called Project 1640, is the first of its kind capable of spotting planets orbiting suns outside of our solar system.

Developed by scientists and engineers at the American Museum of Natural History, the California Institute of Technology and the Jet Propulsion Laboratory, the NSF-supported Project 1640 is based on four major instruments that image infrared light generated by stars and the warm, young planets orbiting them. This is achieved by creating an “artificial eclipse” with a device called a coronagraph.

After the majority of the starlight is filtered out of the image, about half of a percent of that light remains in the form of a bright speckled background superimposed on the solar systems of interest. Each of these imaged speckles can be hundreds of times brighter than the planets and must be controlled with exquisite precision. Project 1640 has demonstrated a technique that can darken the speckles far beyond any previous capability, producing some of the highest-contrast images ever made.

These two images, taken in June, show HD 157728, a nearby star 1.5 times larger than the Sun. The star is centered in both images and its light has been mostly removed. The image on the left was made without the ultra-precise starlight control of which Project 1640 is capable. The image on the right shows the instrument’s full precision power, allowing us to see objects up to 10 million times fainter than the star.