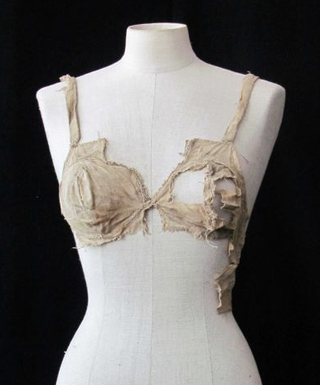 A linen bra found in an Austrian castle in 2008. The garment dates back 600 years.
(Image: © Archeological Institute of the University of Innsbruck)

A surprisingly modern-looking linen bra dating back 600 years has been found in a medieval castle in Austria.

According to the Associated Press, the lingerie was first discovered in 2008, but the garments have flown under the radar until now. The finding is a surprise to fashion historians, who have believed that the bra was a relative newcomer to the clothing scene, dating back only a century or so.

"We didn't believe it ourselves," Beatrix Nutz, the University of Innsbruck archeologist who discovered the garments, told the AP. "From what we knew, there was no such thing as bralike garments in the 15th century." [Cleavage Countdown: 8 Facts About Breasts]

Four bras in total were discovered mingled among dirt, straw, leather and other fabric scraps in Lemberg Castle in Tyrol, Austria. The bras had cups like today's lingerie, and one sported broad shoulder straps and the remnants of what was likely a back strap. According to the University of Innsbruck, the bras were once embellished with lace.

The fashion timeline has always pegged the invention of the modern bra to the late 1800s, after corsets began to go out of fashion. Though the French word "brassiere" first appeared in Vogue in 1907, American Mary Phelps-Jacobs patented the first bra design in the United States. Her version consisted of two handkerchiefs stitched together with ribbons for straps.

The Austrian discovery suggests that, instead, women wore bras first. Only later were the garments pushed out by corsets, then revived in the 1800s as fashions changed.

The researchers also found linen underwear in the castle, Nutz told the AP. But that garment would have to belong to a man — medieval women went bare under their skirts.