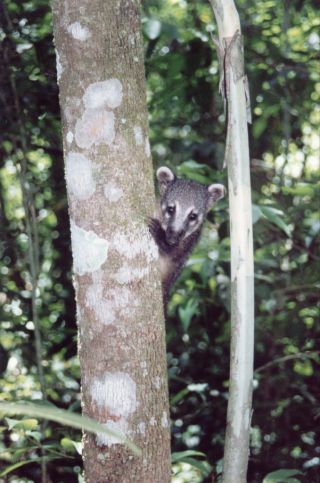 Unrelated adult coatis (a raccoon-like animal from south America) help juveniles steal from their relatives, a new study suggests. This kind of "turning on kin" behavior isn't well documented in the animal kingdom, the researchers said.

"No previously published model of animal behavior would have predicted that young juvenile coatis should regularly attack and steal food from older relatives," study researcher Ben Hirsch, of the Smithsonian Conservation Biology Institute, said in a statement.

Once they noticed this behavior, the researchers wanted to know how closely the coatis performing this act were related. The new genetic analysis found that the juveniles were sometimes attacking their own kin and often received help from unrelated adults.

"Additionally, the pattern that adult females come to the aid of these non-related juveniles really flies in the face of what we thought," Hirsch said. "What we have described is a quasi-cooperative behavior that is evidently not kin based."

Coatis, which are found in South America, are a highly social species related to the raccoon and known for being particularly aggressive, especially when it comes to food. They live in cohesive groups of up to 65 individuals that usually include only a single adult male.

Over the course of the three-year study, Hirsch monitored the behavior of 150 individual coatis in four social groups in Iguazu National Park in Argentina. Using genetic data, he found that in 57 percent of the cases in which an adult female helped a juvenile during an aggressive encounter, the female was not the mother of the juvenile.

The question researchers are left with is how do females benefit from protecting unrelated juveniles. While adult females in some species protect juveniles from aggression, the patterns found in coatis appear to be unique among mammals.

"By understanding the factors that shape the evolution of animal societies, we may be able to further understand how and why human societies might have evolved," Hirsch said.

The study was published May 18 in the journal PLoS ONE.