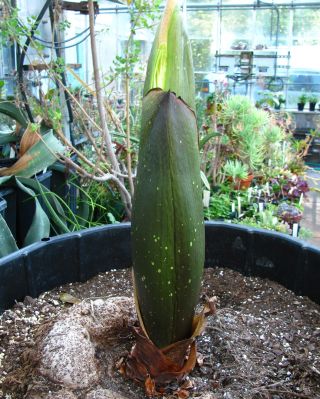 Western Illinois University's Titan Arum #3, a plant nicknamed the "Corpse Flower" due to its putrid odor when it blooms, is on the verge of blooming again.
(Image: © Jeff Hillyer)

The fascinating flora that is the corpse plant — a huge plant that stinks of rotting beat and blooms only once in a blue moon — is in the news again, as another of the gigantic plants gets ready to bloom.

Western Illinois University has set up a live streaming video camera of one of it's Titan Arum — a plant nicknamed the "Corpse Flower" because of its horrible scent — so viewers can watch the large plant's blooming phenomenon. (Watch streaming video of the flower blooming)

Visitors with noses of steel can also go smell the plant, named WIU Titan #3, in Western's Botany Greenhouse when it is blooming, which should occur any day now. The Western Illinois University Botany Greenhouse is open from 8 a.m. to 4:30 p.m. Monday through Friday, and special hours will be scheduled once the blooming process begins.

"Almost two years after it initially bloomed, WIU Titan #3 is in the process of doing it again. The first time it bloomed was June 29, 2010," Western Illinois University greenhouse manage Jeff Hillyer said in a statement. "The Titan Arum plant — also known as the 'Corpse Flower,' thanks to a less-than-pleasant smell — is a member of the Araceae family that includes plants such as Jack-in-the-Pulpit, Calla Lily and Philodendron."

"The bloom (or inflorescence) is composed of thousands of flowers, and the nickname comes from the blooms' odor that smells like rotting meat," Hillyer said. "In its native environment of the equatorial rainforests of central Sumatra in western Indonesia, the Titan Arum is pollinated by carrion beetles and flesh flies, which are attracted to the horrendous odor."

In addition to the live video stream documenting the event, updates about the status of Titan #3's latest inflorescence on the Western Illinois University Botany Greenhouse blog.

Once Titan #3 blooms again, this will be the fourth time in two years that a Titan Arum has bloomed at Western Illinois University. According to Hillyer, Titan #3, as well as three others at WIU, all came from the University of Wisconsin-Madison in 2002, and in May 2010, Titan #1 bloomed, followed by Titan #3 in June 2010. In September 2011, WIU's Titan #2 bloomed.

"We obtained them as seed, and since then, we have been growing them," Hillyer said. "One of Wisconsin's Titans, Big Bucky, was the ovule donor, and the pollen donor was Mr. Magnificent from the Marie Selby Botanical Garden in Sarasota, Florida."