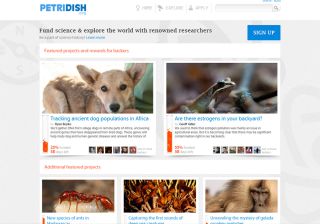 Scientists are bypassing funding agencies and going directly to the public in a new initiative on the Web aimed at letting anyone donate money to research projects they support.

The new website, called Petridish.org, showcases research in need of a funding boost in fields ranging from astronomy to ecology, biology, geology and climate science.

In text and video on the site, scientists describe their projects and costs. Then members of the public can pledge as much as they want. Only if the project receives pledges to cover its full goal by its deadline will anyone be charged anything.

"I think science is something that's always been underfunded," said Matt Salzberg, Petridish's founder. "We wanted to provide people who believe in science and research and the benefits that it provides to society a way to directly get involved and be a part of new discoveries." [Science R&D Spending (Infographic)]

In exchange, those who helped make the research possible are rewarded with perks like updates on the experiment, acknowledgements in journals, visits to field sites, and even naming rights to new species.

The site shares its format with other crowdfunding platforms, such as Kickstarter.com, which allows people to donate toward artistic projects. Petridish launched earlier this month, and has already received more than 20,000 funding pledges.

"I've been really excited by the outpouring of support we've received," Salzberg told LiveScience. "It's definitely exceeded my expectations."

Petridish staff thoroughly review submissions before posting them on the site to ensure they are from reputable scientists and that they are projects that seem likely to gain traction with the public.

"In many cases the scientists have NSF [National Science Foundation] grants, and they want to fund an additional component of their research that their NSF funding doesn't cover," Salzberg said. "We have people doing earlier stage work for which they need preliminary data. We have people applying who, for one reason or the other, are not being funded by traditional sources."

Current featured projects include a study of the sounds made by "extremophile" organisms living deep under the ocean, an attempt to understand hyena thoughts through analyzing their calls, and a quest to map out an ancient supercontinent called Rodinia by studying rock samples from Antarctica. [8 Wacky Extremophiles]

Already, some projects have fulfilled their goals.

Astronomer David Kipping's plan to search for exomoons around alien planets will be moving forward, thanks to the $10,277 he's raised so far, surpassing his goal of $10,000. The Harvard-Smithsonian Center for Astrophysics researcher thanked his supporters in an update posted to the Petridish site.

"It is amazing that we reached this with 13 days to spare," Kipping wrote. "The $10k goal means we can acquire the 64-core machine we originally earmarked for the project."

For many researchers, the arrival of Petridish couldn't be timelier.

"Everyone's really excited about it because the funding environment right now is very difficult," Salzberg said. "There are certain kinds of projects, such as earlier-stage research, which are just much harder to get funding for. Ecology is particularly underfunded."

About 5 percent of the funds raised on Petridish go back to the site — a rate Salzberg says is much lower than the overhead of many charities, and significantly less than the cut of government funding grants that goes toward scientists' universities.