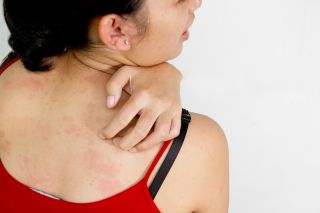 It feels oh so good to scratch an itch, but exactly how much pleasure we get from scratching depends on exactly where on the body the itch is, a new study says.

The study could lead to a better understanding of itching, and how to relieve it for people who have skin diseases that cause it, said study researcher Dr. Gil Yosipovitch, a professor of dermatology at Wake Forest Baptist Medical Center, in Winston-Salem, N.C.

Yosipovitch and colleagues induced itch on the ankles, forearms and backs of 18 study participants with tiny hairs from a tropical plant called the cowhage plant — a technique often used in studies on itching. The hairs were rubbed gently in a circular motion for 45 seconds within a small area of the skin, and removed once the skin started to itch. Participants rated how intense the itch was and how good it felt to scratch it, every 30 seconds for the next five minutes. Participants' rated their itches on a scale of 0 (no itch) to 10 (maximum unbearable itch).

The itching was most intense on the ankle and back, while the perception of itch and scratching relief were less pronounced on the forearm.

The new findings may explain why patients with eczema and psoriasis commonly have itching on their back and ankle.

"We never understood why those areas were more affected, and now we better understand that itch in these areas is more intense and pleasurable to scratch," Yosipovitch said.

The reason for difference in itching pleasurable may lie in the way that sensory nerves are distributed throughout the body, the researchers say.

The findings may have implications for itch treatment.

"If we could translate this to a treatment that induces a pleasurable relief sensation without damaging the skin, we may be able to help itchy patients," he said.

The study was published online this month in the British Journal of Dermatology.