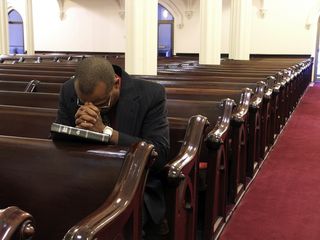 Religion may only provide a happiness boost when others join in, a new study finds.
(Image: © Christy Thompson, Shutterstock)

Religious people tend to feel better about themselves and their lives, but a new study finds that this benefit may only hold in places where everyone else is religious, too.

"The results suggest that religiosity, albeit a potent force, confers benefits by riding on cultural values," study researcher Jochen Gebauer of Humboldt University in Berlin and colleagues wrote online Jan. 5 in the journal Psychological Science.

Many studies have shown benefits to religion, from an increase in self-control to greater happiness among the faithful. But where these benefits come from is still an open question. It could be something related to religion or religious teachings; alternatively, the social side of religion might play a role. For example, a December 2010 study published in the journal American Sociological Review found that it's the social networks fostered by attending religious services that make religious people more satisfied with their lives.

Gebauer and colleagues wanted to know if larger cultural forces contribute to the well-being of spiritual sorts. They turned to eDarling, the European version of dating websites like eHarmony or Match.com.

Users of eDarling answer a question in their profiles about how important religion is to them; while setting up their profiles, they also complete psychological surveys asking them how "calm," "cheerful" and "content" they feel, among other measures of happiness, life satisfaction and self-esteem.

Using information from 187,957 daters, the researchers compared each individual's spirituality and happiness against the backdrop of religiosity in each person's country. (Data on countrywide religiosity came from eDarling and from the Gallup World Poll.) They found that religion did indeed contribute to happiness, but only in cultures where religion is celebrated. For example, a believer gets a happiness boost in Turkey, where religion is part of the fabric of daily life and taking part means you're doing the "right" thing in your culture. But that same person wouldn't see any benefit in Sweden, where few people care much about religion.

The study isn't focused on any specific religious denomination, but on religious feelings in general, the researchers wrote on their eDarling research blog. Nonetheless, the findings suggest that research on religion and happiness in the United States — where religion is relatively important compared with many other nations — may not apply across all cultures.