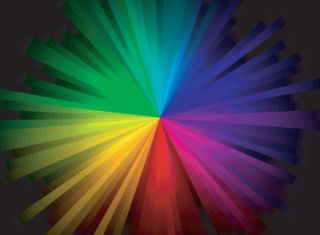 To make the time cloak, the researchers used a a device that they call a "time lens," which split a single-color laser beam into a spread of wavelengths, then slowed half of those wavelengths while speeding up the others.
(Image: © Mahesh Patil | Shutterstock)

For years physicists have been refining invisibility cloaks—physical setups that cleverly reroute light around a region in space, effectively concealing any object that might be inside. But now researchers at Cornell University have built the first temporal cloak, a device that obscures an object or event not at a particular point in space but at a specific moment in time.

In a preliminary demonstration, Cornell postdoctoral researcher Moti Fridman and his colleagues shone a laser beam through an experimental apparatus and into a detector. A physical object or even another beam of light in the laser beam’s path could create a change in the laser light that the detector would register. But with some clever optics, Fridman and his colleagues were able to open up a brief time gap in the beam and then close it back up as if the beam had gone undisturbed, and such that the detector did not register the interruption. The gap allows anything that would have otherwise affected the beam to instead slip right through [see animation below], leaving no trace for the detector to pick up.

The researchers used the cloak to obscure an optical pulse that ordinarily interacts with the laser beam to produce a telltale spike at a certain wavelength. When the event was cloaked, however, the telltale spike was basically undetectable.

The cloak, described in the January 5 issue of Nature, relies on the fact that light of different colors moves at different speeds through certain media. (Scientific American is part of Nature Publishing Group.) Using a device that they call a "time lens," the researchers split a single-color laser beam into a spread of wavelengths, then slowed half of those wavelengths while speeding up the others. That created a very brief time gap that could be closed again before the beam reached the detector by reversing the lensing process, restoring the beam to a single, seemingly undisturbed wavelength.

The gap achieved by Fridman and his colleagues was extremely small—just 50 picoseconds, or 50 trillionths of a second, in duration. The researchers note that it is possible to extend the gap somewhat, but that scattering and dispersion effects limit the scope of the temporal cloak to a few nanoseconds.