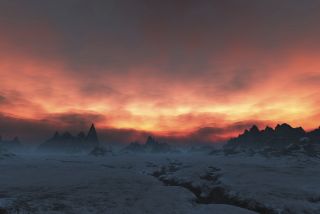 The end of the world has been predicted by dozens, if not hundreds, of "prophets" over the centuries. The most recent is Harold Camping, who believes that the end will come on October 21.
(Image: © Jens Beste, Shutterstock)

Harold Camping's predicted doomsday has been peaceful so far, with the radio preacher who prophesied Judgment Day on May 21 and the end of the world today (Oct. 21) keeping a low profile.

Camping, who has claimed to have a numerical method for interpreting the Bible's prophecies, has remained firm that a spiritual Judgment Day did occur in May, albeit without the earthquakes and destruction he had predicted. Since then, however, his predictions of the end have been sprinkled with words like "probably," and he now says that today's alleged apocalypse will be a quiet one.

Camping and his followers have declined to speak to the media this time around, unlike in May when they bought up billboards and shouted the news about Judgment Day from street corners. The programming on Camping's Family Radio is different this time, too: In May, the station reverted to hymns and devotional music as Camping's followers waited for the Rapture. Today, the station is running a typical schedule of shows, including the anti-Charles Darwin "Beyond Intelligent Design," and "Walk With The King," a program hosted by late evangelical preacher Robert Cook.

Although Camping is at an extreme, belief in an eventual apocalypse is not uncommon in the United States. According to a recent Pew Research Center Survey, 79 percent of U.S. Christians say they believe in the second coming of Jesus Christ. Twenty percent of all American Christians believe that the second coming will happen in their lifetimes.

However, Camping has earned scorn from many mainstream Christians, who have called him a "false prophet" and cited Bible verses that state that no one can know when the end will come.

It's not unusual for doomsday predictors to re-trench after a failed prediction, said Stephen Kent, a sociologist who studies new religious movements at the University of Alberta. Earlier apocalyptic believers have found ways to claim, like Camping, that their predictions did come true at a spiritual level. It's very rare for end-of-the-world prophets to renounce their faith in God's swift return, Kent said.

"That kind of behavior, continued belief in the face of clearly contrary evidence, is characteristic of ideologues," Kent told LiveScience. "Regardless of what the ideology is, be it religious, political, pseudo-medical and so on. If facts contradict the ideological claim, then ever so much worse for the facts."