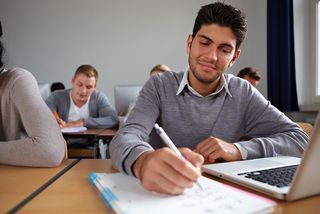 Students who rated their own performance as much higher than it actually was were significantly more likely to feel depressed than those who had rated their performance more accurately, according to the study.
(Image: © Robert Kneschke | shutterstock)

Giving yourself undeserved pats on the back may lead to psychological distress, a new study shows.

The overly positive, yet distorted, view of one's achievements could keep someone from experiencing dejection, the researchers say.

But the price may be more anxiety over whether others will find out. In addition, if a person thinks they are doing such a bang-up job, there's no room for improvement.

Young-Hoon Kim of the University of Pennsylvania and Chi-Yue Chiu of Nanyang Technological University in Singapore conducted four studies that included 295 U.S. college undergraduates with an average age of 19 and 2,780 Hong Kong students from grades 7 to 12. The participants were separated into four groups, with three U.S. groups and one Hong Kong group.

In the first two experiments, the Hong Kong group and one of the U.S. groups completed academic tests. They then rated how well they thought they did and compared their own performances with that of other students at their schools. After their assessments, the participants answered a questionnaire that is widely used to measure symptoms of depression.

In the third and fourth experiments the remaining sets of U.S. undergraduates also completed academic tests. But this time, the subjects were given deceptive feedback, with high performers made to think that their performance was low and low performers informed that their performance was high. Control groups received their scores without feedback.

According to results from all four studies, the students who rated their own performance as much higher than it actually was were significantly more likely to feel depressed than those who had rated their performance more accurately.

"These findings challenge the popular notion that self-enhancement and providing positive performance feedback to low performers is beneficial to emotional health," the researchers write in the October issue of the journal Emotion. "Instead, our results underscore the emotional benefits of accurate self-assessments and performance feedback." [5 Ways to Foster Self-Compassion in Your Child]

The researchers say the results speak to the way in which parents and teachers interact with children.

For example, teachers who are motivated to protect students' self-esteem may be reluctant to provide accurate negative feedback to low performers," the researchers write. "Many parents also feel compelled to make their children feel good about themselves by praising their abilities."

They add, "Similarly, under the influence of the self-esteem movement, teachers are often pressured to provide unfounded positive performance feedback to their students."

Self-effacement may be just as bad, however. The studies showed that subjects who rated their performance as much lower than it actually was also showed higher levels of depression. Past research has suggested that people who understate their abilities tend to be depressed and have low self-esteem, the researchers write.

"Individuals with relatively high performance would be less depressed if they acknowledge their strengths than if they hold excessive negative self-assessments," the researchers write.

The study was published in the October issue of the journal Emotion.