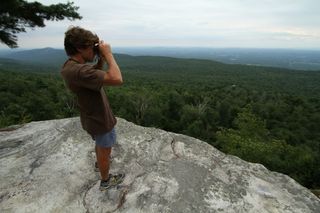 Many miles to go before he sleeps: John Davis gazes out over the Taconic Mountains in New York.
(Image: © Phil Lacinak.)

Since early this year, a lone conservationist and wilderness explorer has walked, biked and paddled more than 6,500 miles (10,460 kilometers) across North America, and now he is finally nearing the end of a sometimes dangerous journey.

The months-long trip has taken the explorer through America's last wild places in hopes of saving them, John Davis told OurAmazingPlanet back in August.

"I'm trying to help Americans realize that in order to preserve our natural heritage we need to not just save small parts of our wild places, but the connection between them," Davis said, when he was six months into his journey.

Davis is now in a small town in northern Maine, according to the Wildlands Network, a conservation organization he co-founded that is sponsoring the trip. He will soon walk across a bridge into Canada.

Yet once there, more than 300 miles (480 km) will still lie ahead before Davis reaches his final destination, Quebec’s Forillon National Park, which lies at the tip of Canada's Gaspé Peninsula.

Back in August, Davis said he was hoping he could end his journey atop snowshoes — a far cry from the way it began.

In early February, Davis started his trip by swimming away from Key Largo, snorkeling north, on a track that has zigzagged through national parks , forests and natural places that lie in between.

Davis has said that he aims to not only promote preservation of American's dwindling wild areas, but the corridors connecting them.

He has ridden a bicycle for a large part of his trek, and spent his nights in a small tent. He said his most dangerous encounters haven't been with wild animals — and he's seen quite a few — but with cars and trucks on the road.

Wildlands Network said in a statement that it appears Davis will reach the end of his journey on Nov. 14.