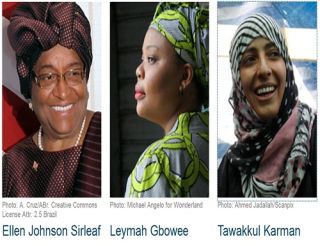 The prize was awarded jointly to Ellen Johnson Sirleaf, Leymah Gbowee and Tawakkul Karman "for their non-violent struggle for the safety of women and for women's rights to full participation in peace-building work."

Thorbjørn Jagland, chairman of the Norwegian Nobel Committee, announced the winners of the prize in Norway on Oct. 7. It comes with a $1 million award, shared between the winners. A statement on the committee's website reads: "We cannot achieve democracy and lasting peace in the world unless women obtain the same opportunities as men to influence developments at all levels of society."

The three women awardees strive for worldwide women's rights, sticking to non-violent means. The women, all from different backgrounds, worked together on the UN Security Council Resolution 1325, which made violence against women in armed conflict an international security issue and underlined the need for women to have equal footing with men in the peace-building process.

Sirleaf is the first female president of Liberia, taking the position in 2006. During her term she has contributed to securing peace in Liberia, promoting economic and social development and strengthening the position of women in the country. She is up for reelection on Tuesday (Oct. 11).

Gbowee has also worked to promote peace in Liberia, mobilizing and organizing women in all ethnic and religious groups of the country. She is also enhancing the position of women in West Africa and promoting female participation in elections in Liberia.

Tawakkul Karman is one of the youngest Nobel prize recipients, at 32 years old. She is a politician in Yemen and creator of the politically active group, Women Journalists Without Chains. She has played a leading part in the struggle for women’s rights and for democracy and peace in Yemen, participating in protests and sit-ins.

In a statement, the Norwegian Nobel Committee said they, "hope that the prize to Ellen Johnson Sirleaf, Leymah Gbowee and Tawakkul Karman will help to bring an end to the suppression of women that still occurs in many countries, and to realise the great potential for democracy and peace that women can represent."