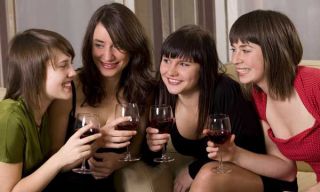 Regular, moderate consumption of alcohol at midlife may be related to a modest increase in overall health among women, a new study shows.

For middle-aged women, having one alcoholic drink a day — as opposed to not drinking at all or having two or more drinks — may improve health and pave the way to a long life, a new study shows.

"These data suggest that regular, moderate consumption of alcohol at midlife may be related to a modest increase in overall health status among women who survive to older ages," the study said.

Researchers from the Harvard School of Public Health and the Brigham and Women's Hospital in Boston studied questionnaire responses from 121,700 female nurses enrolled in the United States Nurses' Health Study, which has been ongoing since 1976.

In their analysis, the researchers focused on the 98.1 percent of survey participants who were not heavy drinkers during their middle-age. They examined the health status of the 13,984 women in the study who lived to be 70 years or older.

The results showed that women who had about one drink per day of any alcoholic beverage during middle age had better overall health when they grew older than women who did not drink at all, who consumed more than two drinks a day or had four drinks or more at one time — behavior known as binge drinking.

The researchers defined good overall health as having no major chronic diseases, such as heart disease or diabetes, and no major cognitive and physical impairment or mental health limitations.

The study authors said such health leads to "successful ageing."

The study was published this week in the journal PLoS Medicine.