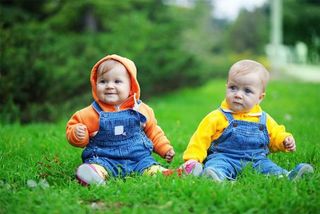 Boy or girl? Do you have a preference?
(Image: © © Alena Ozerova | Dreamstime.com)

If they were only allowed to have one child, more Americans would prefer it be a boy rather than a girl, a new survey finds.

Despite the intervening woman's movement, the results are very similar to those found when the same question was asked of Americans in 1941.

The Gallup polling agency asked a random sample of 1,020 American adults whether they'd prefer to have a girl or a boy if they could only chose one. Forty percent said they'd pick a boy, 28 percent said they would want a girl, and the rest didn't mind either way or weren't sure.

Americans younger than 30 are the most likely to say they'd prefer a boy, with 54 percent making that choice, and 27 percent preferring a baby girl. The gap then declines steadily with age. Education also plays a role: People with a postgraduate education break even in their preferences, while 44 percent of those with a high-school education or less prefer boys, compared with 25 percent who prefer girls.

It's not known how many parents in the United States have the opportunity to select what sex they'd like their baby to be, but sex-selective abortions in other countries have skewed the gender balance. Normally, 105 baby boys are born for every 100 girls. According to China's census, 118 baby boys were born for every 100 girls in 2010. Kits that promise to reveal the sex of a baby at just a few weeks' gestation have raised fears of similar sex-selective abortion in Western countries, Gallup officials said.