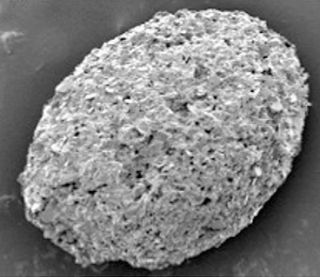 Scanning electron microscopy images reveal an microscopic, oval-shaped shell with tapered ends, from which an organism’s feet may have extended. The surface of the shell are made up of tiny bits of silica, aluminum and potassium, which the organism likely collected from the environment and glued to form armor
(Image: © Tanja Bosak)

Tiny undersea organisms not only survived some of Earth's harshest weather, when the planet was covered in a sheet of ice some 700 million years ago, new microfossil evidence suggests they developed protective armor and thrived after "Snowball Earth."

Scientists hypothesize that Earth underwent two such global glaciations between 710 million and 635 million years ago. [The World's Weirdest Weather]

"What we found in Namibia and Mongolia was the first occurrence of microfossils in rocks deposited immediately after the first Snowball Earth event," study researcher Sara Pruss of Smith College told LiveScience. "Life not only survived this dramatic climate change but flourished in its immediate aftermath."

The fossils were collected from cap-carbonate rocks — the very first layers of sediment deposited after the first Snowball Earth — in southern Africa and eastern Asia.

"Our findings provide insight into microbial ecosystems that existed between the two global glaciations," Pruss said by email. "Because our organisms are found at a later time (the critical interval between the two glaciations), they are helping to fill in long-standing gaps in the fossil record."

After freeing the trapped fossils from the rocks, study researcher Tonja Bosak of MIT and colleagues looked at them under a high-powered electron microscope. They saw what appeared to be hollow shells that may have held single-cell creatures.

The tiny, amoeba-like organisms probably built their armor from material gleaned from the surrounding environment. The shells looked like tiny black ovals with a single notch. The creatures may have grabbed things from their environment with their foot-like projections through the notch.

They would have been similar to a group of organisms called testate amoebae, which are still abundant in many land environments. However, the amoebae living during the post-Snowball Earth thrived in the oceans and probably made their way onto land sometime later in their evolution, Pruss said.

The shells were made of an amalgamation of minerals freely available in the creatures' environment, including silica, aluminum and potassium — the oldest example of "agglutination," or building a shell from minerals available around them. There were differences between shells from different sites, though; those from Namibia were rounder, while the ones from Mongolia were more tube-shaped.

The shells likely provided protection from the pressures of the deep ocean environment, and from other, possibly predacious organisms, though it's hard to tell what their environment was like, Pruss said.

Other shelled organisms had lived before the Snowball Earth event, though they seemed to have built their own, plate-like shells. They don't have any known counterparts today.

The study will be published in a forthcoming issue of the journal Earth and Planetary Science Letters.