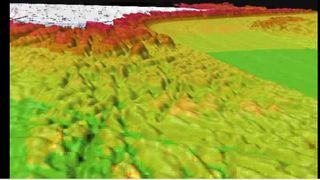 Nearshore reef in the vicinity of the San Gregorio fault. The 3-D image is color-coded by depth: the blue and green areas are deeper than the areas in yellow and red. As a wave front approaches the shoreline and progressively enters shallow water, it becomes compressed and grows taller.
(Image: © NOAA.)

Researchers have mapped the seafloor off central California in unprecedented detail, revealing what produces the famed waves at a reef called Mavericks. The towering waves are much prized by surfers.

The newly collected data shows that the wave-making setup at Mavericks involves a portion of a rocky reef that protrudes above its surroundings while remaining under water. As a wave approaches the shore and enters shallower water, it compresses and grows taller. A ridge promontory also focuses wave energy and the wave rapidly increases in height, creating a monster.

At the highest point of the protrusion, the wave becomes unstable and breaks. Data collection was impossible in that location because the rough sea presented too much danger to the scientists.

Although interesting for explaining the mystery of Mavericks, scientists and others will use this data for a variety of purposes, including identifying hazards to navigation, classifying different habitat types, locating biological hot spots, and studying the San Gregorio fault,a major active fault within the San Andreas Fault System.

"This research is extremely valuable in identifying areas important to the California Marine Life Protection Act process and could simultaneously help to predict seismic hazards along California's coast," said Secretary for Resources Mike Chrisman, chair of the Ocean Protection Council.