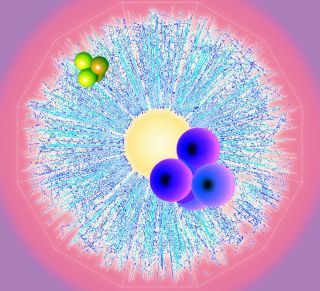 Roughly equal amounts of matter and antimatter are created in the collision of energetic gold nuclei inside the particle accelerator dubbed RHIC, but because the fireball expands and cools quickly, antimatter can survive longer than that created in the big bang. In this collision an ordinary helium-4 nucleus (background) is matched by a nucleus of antihelium-4 (foreground).
(Image: © STAR Collaboration and Lawrence Berkeley National Laboratory)

Physicists have detected the heaviest bit of weird antimatter ever found -- a nucleus that is the antimatter partner to helium.

For every particle of matter, a matching antimatter particle is thought to exist with the same mass, but an opposite charge. The problem is, when the two come into contact, they annihilate. This gives rise to one of the great mysteries of physics: Why does our universe appear to be made entirely out of ordinary matter?

At the Relativistic Heavy Ion Collider (RHIC) – a particle accelerator at the U.S. Department of Energy's Brookhaven National Laboratory -- the nuclei of gold atoms collide, head-on, at near the speed of light. This simulates the conditions just after the Big Bang, a time when scientists think the universe was swirling with equal amounts of antimatter and regular matter.

Out of almost 1 billion atomic smashups, researchers detected 18 examples of the unique signature of the antihelium-4 nucleus. These 18 signatures were among data for half a trillion charged particles emitted by nearly a billion collisions.

"It's likely that antihelium will be the heaviest antiparticle seen in an accelerator for some time to come," said study team member Xiangming Sun of Berkeley Lab's NSD. "After antihelium, the next stable antimatter nucleus would be antilithium, and the production rate for antilithium in an accelerator is expected to be well over two million times less than for antihelium."

To search for heavier antiparticles, an experiment known as the Alpha Magnetic Spectrometer (AMS) is scheduled to be delivered to the International Space Station at the end of April. A principal part of its mission is to hunt for distant galaxies made entirely of antimatter.

The new finding will inform the search by AMS. "An observation of antihelium-4 by the AMS experiment could indicate the existence of large quantities of antimatter somehow segregated from the matter in our universe," said Hank Crawford, a collaborator from the University of California, Berkeley, Space Sciences Laboratory.

Just recently, the world's largest atom smasher, the Large Hadron Collider in Switzerland, set a record for colliding two beams of more particles than ever before.