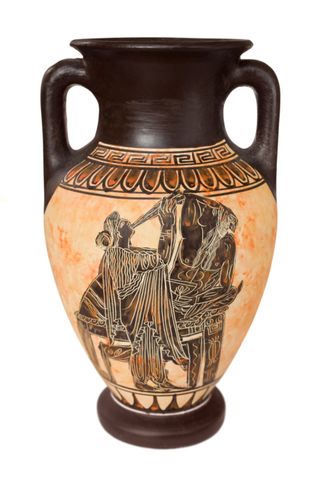 A collaborative group of California scientists from the Getty Conservation Institute (GCI), the Aerospace Corporation and the Department of Energy's SLAC National Accelerator Laboratory (SLAC) at Stanford is investigating the ancient technology used to create works of art, such as the Greek vase above. From their study of the makeup of this iconic pottery, the researchers hope to further current conservation practice and future space travel.
(Image: © Thinkstock)

Attic pottery is the iconic red and black figure-pottery produced in ancient Greece from the 6th to the 4th centuries B.C. Similar to the vessel shown above, such pottery required immense precision to produce, and the means by which craftsman created these vessels is still not completely understood.

Now, thanks to funding from the National Science Foundation Chemistry and Materials Research in Cultural Heritage Science program, a collaborative group of California scientists from the Getty Conservation Institute (GCI), The Aerospace Corporation, and the Department of Energy's SLAC National Accelerator Laboratory (SLAC) at Stanford is investigating the ancient technology used to create these works of art. From their study of the makeup of this iconic pottery, the researchers hope to further current conservation practice and future space travel.

What does the investigation of ancient ceramic pots have to do with cutting-edge research into future space travel? More than you'd think – it's hard to imagine a more dissimilar pairing, but the technology is actually quite transferrable.

Led by Karen Trentelman, a conservation scientist at the GCI, the grant team is working with conservators and curators from the J. Paul Getty Museum to attribute characteristic material "signatures" to known artists, which should aid the classification of unsigned works. The information will provide a deeper understanding of ancient pottery techniques and inform future conservation methods.

Of importance to aerospace industries, the effort will also create a deeper knowledge of iron-spinel chemistry, which is critical for advanced ceramics found in aerospace applications.

"Ceramic components are used all through space technology and space vehicles." says Mark Zurbuchen, a materials scientist with The Aerospace Corporation. "We need to continue to learn about interactions of components within these materials to help us better understand any real-world issues that may arise in actual space components."

One primary scientific technique the researchers are using is X-ray absorption near edge structure (XANES) spectroscopy, a tool for determining the iron oxidation states in the Attic pottery, which gives the pottery its iconic black and red coloring.

The researchers will also use X-ray absorption fine structure (EXAFS) analyses to provide information on the molecular structure of the iron minerals, and high resolution digital microscopy to study the surface of the works, among other analytical methods.

For GCI scientist Marc Walton, who helped Trentelman develop the project, the effort is about understanding the society in which these pots were made.

"Using scientific methods, we want to look at the sociological context of ancient Greek workshops and potters and re-establish what we know about these workshops," said Walton.

At SLAC, which houses a high powered X-ray source driven by a particle accelerator called a synchrotron, staff scientist Apurva Mehta is working with the team to reveal nanoscale details across large regions of the pots. According to Mehta, the work will push the development of high-powered tools to probe many other materials, from biomaterials to the electrodes of lithium-ion batteries. His work will also help uncover answers to some important questions.

"There were several workshops making this pottery at the same time," says Mehta. "It's a fairly challenging technology—how was it invented? Did one workshop invent it and other workshops copy, modify and perfect it? Were they collaborating or competing with each other? I want to understand how technology really works in a society. How does a technology grow, how does it transfer from place to place, how does it change, what keeps it alive, why do some technologies eventually die away? Maybe this will help us understand how technologies are growing and changing today."

Using the information gleaned from the scientific studies of ancient vessels as a guide, the group also plans to reproduce the technology used by early artisans, ultimately firing small replicas.

The scientists hope to uncover whether works attributed to different artists used the same methods, or if techniques for creating the work differed amongst workshops producing pots at the same time. The researchers also hope to document how the process evolved over time.

The results are expected to impact a diverse range of fields in both art and science, including materials science, chemistry, archaeology, art history and art conservation.

"By partnering with SLAC and The Aerospace Corporation, we can look at the artwork in a new way," said Trentelman. "Scientific analysis gives us new insight into how and when the work was produced. In turn, our analysis can support hypotheses developed by art historians about ancient workshop practices, and also inform museum conservation efforts. Using nothing but clay dug from the ground, ancient craftsmen were able to create magnificent vessels with amazing detail. Something doesn't need to be complex to be sophisticated. If we can understand the technology with which these works of art were made, we can use the knowledge for a surprisingly wide variety of applications."

This research is funded by the National Science Foundation Chemistry and Materials Research in Cultural Heritage Science program, which supports collaborative research between academic, industrial and cultural heritage institutions. This program was developed out of a workshop jointly sponsored by the NSF and the Andrew W. Mellon Foundation.

Editor's Note: This research was supported by the National Science Foundation (NSF), the federal agency charged with funding basic research and education across all fields of science and engineering. Any opinions, findings, and conclusions or recommendations expressed in this material are those of the author and do not necessarily reflect the views of the National Science Foundation.