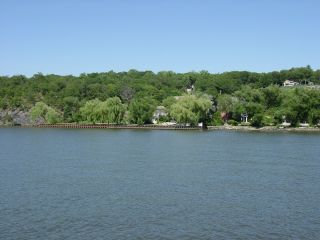 New York City's Hudson River may seem far from developing countries where three to four children die every minute due to diseases related to polluted water, but John Cronin sees it as a living laboratory for how to manage those more polluted waterways. To fulfill that vision, he hopes to turn the Hudson into the most instrumented river in the world.

Having sensors deployed all along the Hudson means much more than bragging rights. Such devices would ideally give constant updates about river conditions that impact everything from swimming beaches to drinking water, as well as cooling water for a nuclear power plant that sits at Indian Point, N.Y. If Cronin, director of the Beacon Institute for Rivers and Estuaries, can pull it off, he plans to spread the lesson to all corners of the globe.

He pointed to a sensor that can perform real-time microscopic imaging that immediately identifies bacteria, larger parasites and other tiny creatures which may pose a threat to human health.

"We developed that for deployment on the Hudson to monitor swimming beaches," Cronin said. "The same technology, once perfected, can be deployed in a river in a distant corner of the developing world."

Having more data available all the time goes beyond a luxury. Such constant monitoring is crucial because "98 percent of river changes happen just 2 percent of the time," Cronin said.

The Beacon Institute will start with 10 sensor platforms floating on the Hudson this spring, and plans to scale up to 50 over the next five years. But to achieve the dream, it has banked its hopes upon "smaller, faster, cheaper" innovations that can deliver hundreds or thousands of inexpensive sensors.

"At the point where sensors are the size of chips, analytics are lightning fast and costs virtually make [the chips] expendable, we'll be able to have a completely instrumented river," Cronin told InnovationNewsDaily.

Besides sensors, the Beacon Institute also needed a system that can run instant analyses and immediately deliver usable information for river managers. It has partnered with technology giant IBM for such real-time analytics.

"We're focused on filling the information void that's in the water industry," said Cameron Brooks, head of IBM's smarter water business. "In a lot of cases, the industry doesn't have the information available in an easily digestible format so that decisions can be made."

Such information might tell the Indian Point nuclear power plant, located up river from New York City, when to close down its cooling intakes when a large group of fish moves through the area, or let city officials know in real-time about the possibility of flooding from rising waters.

A similar system can work for cities as well as natural bodies of water. Widespread smart meters can even alert utility companies about the ebb and flow of water demand and shortages throughout a city. And sensors embedded in water pipes could give instant alerts for possible leakage.

Like the Beacon Institute, IBM sees the Hudson River project as a pilot project for deploying a real-time information system that tracks water conditions. That fits with the company's grand "smarter planet" vision for having smart systems watch over city water usage as well as natural bodies of water such as rivers, lakes and eventually oceans.

Similarly, the Sonoma County Water Agency of California approached IBM for help in managing the local water supply that faces competing claims from people, fish and grape growers who supply the local wine industry. The challenge was even greater considering that the local Russian River faces a drought watch for much of the year.

Perhaps one of the greatest challenges facing smarter water systems comes from a lack of awareness among citizens about just how precious the stuff is coming out of their taps. IBM has launched several initiatives to get people actively engaged in monitoring their water supplies and usage, according to Brooks.

In one case, IBM created an online game for the town of Dubuque, Iowa that encourages citizens to earn "green points" by competing anonymously against neighbors to lower household water usage. The points represent credit toward getting a fridge magnet that displays water usage, or even low-flush toilets – what Brooks called "cooler weapons" that can help achieve victory in the online game.

"IBM, GE, they're very aware of the water marketplace and are investing in innovations needed for treatment and creating smart systems," said Cronin at the Beacon Institute.

In this case, good business also means possibly doing a whole lot of good in a world where 1.2 billion people still lack clean drinking water. As many as 19 million Americans are sickened by contaminated drinking water each year, but most of the affected people live in the "far reaches of the world where nobody is ever going to build a water laboratory," Cronin pointed out.

In those cases, some small, cheap sensors and a real-time link to other parts of the world via satellite could help make all the difference.

"That would give us real-time info about waterways all over the world," Cronin said. "That would change the face of how we look at environmental and human health on the entire planet."