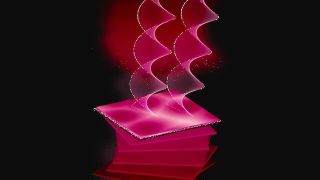 Some materials might undergo twisting if they're hotter than their environments.
(Image: © E. Edwards/JQI)

Extremely hot materials show off their temperature by doing the twist.

A new study suggests that some materials behave weirdly when they're much hotter than their surroundings. Driven by nose-diving, spinning electrons, they twist up like corkscrews.

But these findings are theoretical and have yet to be proven experimentally, said lead study author Mohammad Maghrebi, an assistant professor at Michigan State University. Maghrebi and his team's research started with a simple question: What would happen if you nudged a material out of equilibrium with its environment?

Objects constantly radiate photons, or particles of light. When in equilibrium, at the same conditions, such as temperature, as their environment, objects eject photons at the same rate at which they absorb others back.

This is "the kind of science that we're most familiar with," Maghrebi said. But when the temperature outside an object is lower than the temperature of that object, the thing gets thrown out of equilibrium, and then "interesting things can happen."

For certain kinds of materials, heating up or cooling down the environment leads the objects to radiate not only energy in the form of photons, but also what's called angular momentum — or the tendency of a rotating object to keep rotating, Maghrebi said.

Although photons don't actually rotate, they do have a property called "spin," Maghrebi said. This spin can be described as either +1 or -1. Hot objects that are thrown out of equilibrium radiate photons with mostly the same spin (nearly all +1 or nearly all -1). This synchrony of photons pulls all of the material in the object in the same direction, leading to this torque or twisting motion.

However, the scientists knew that just being hotter than the surroundings wouldn't be enough to sync up the spins of the photons and cause such twisting.

So they focused their theory on a special type of material called a topological insulator, which has an electrical current, or electrons flowing on its surface. This material is hotter than its environment, but it also has "magnetic impurities."

These impurities influence the electrons on the surface such that they prefer one spin (electrons also have spin) over the other. The particles then transfer their preferred spin to the photons that are released, and the material twists, he said.

In principle, you'd have a similar effect for any material as long as you apply a magnetic field to it, Maghrebi said. But in most other materials, that field would need to be "really, really, really huge, and that's not really possible."

Maghrebi said he hopes that other teams will test these theoretical predictions using experiments. As to whether this is just a cool physics finding or something that might have some kind of application, that is unclear.

"I actually don't know if there might be some cool application," Maghrebi said. But it "feels like the kind of thing that might have some applications."

The findings were published Aug. 1 in the journal Physical Review Letters.

Editor's Note: This article was updated to clarify that any future experimental work would be conducted by other teams, not by Maghrebi and his team who are all theoretical physicists.