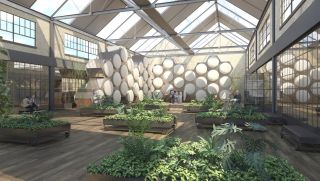 A rendering of a future recomposition facility for the company Recompose.
(Image: © MOLT Studios)

When a loved one dies, you typically get two choices for the human remains: Place the body in a coffin or cremate it into ashes. But now, another option may soon be possible — "natural organic reduction," also known as human composting — at least in Washington state.

The state legislature passed a bill regarding this new end-of-life practice on April 19, and it's now awaiting the signature of Democratic Gov. Jay Inslee. If he signs it, Washington will become the first state to allow human composting, which would become legal on May 1, 2020, according to the Associated Press.

The technique accelerates the decomposition process, turning bodies into soil within 4 to 7 weeks. The practice also has a smaller carbon footprint than cremation or burial, its supporters say. [After Death: 8 Burial Alternatives That Are Going Mainstream]

One of those supporters is Katrina Spade, the founder of Recompose, a company poised to help turn people into soil after they expire. Of note, human composting "is not a type of burial," Spade told Live Science. "It is a newly emerging form of human disposition, and it is an alternative to burial and to cremation."

Having more options is a good thing, she said.

"With cremation, you have the burning of fossil fuels and emission of carbon and mercury particulates into the atmosphere. With conventional burial, there is quite a carbon footprint from the manufacturer and transport of caskets, grave liners, and then the upkeep of cemeteries," Spade told King 5 News, a Washington news station. "So, you have those two options, and if people want those options, absolutely they need to remain. But recomposition uses about an eighth of the energy of cremation, and also has a significant carbon reduction thanks in part from the sequestration that happens of the materials during the process," she said, referring to the sequestration of the body's carbon underground.

Once a body is "composted" through this process, the end product is about a cubic yard (0.76 cubic meters) of soil, or about enough to fill two large wheelbarrows, the AP reported. Just like cremated remains, friends and family can choose to keep the soil in urns, repurpose it in a garden, or spread it on public land, as long as they comply with local laws.

The newly passed bill also approves the use of alkaline hydrolysis, or "water cremation," which is already legal in 19 other U.S. states. In this process, heat, pressure, water and chemicals such as lye are used to reduce bodies into fragments that, like cremated ashes, can be saved in urns or elsewhere, the AP reported.