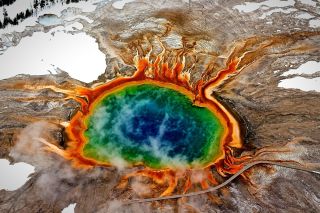 A supervolcano beneath Yellowstone is what drives the hot springs, such as the Grand Prismatic Spring (shown here) and other geological activity in the park.
(Image: © Marie-Louise Mandl/EyeEm via Getty)

The pit of magma beneath the Yellowstone caldera is still an enigma in many ways, but researchers are now closer than ever to understanding how it became the powerhouse of the supervolcano.

A new computer model of the magma plume reveals 7 million years of underground unrest, leading up to the creation of the dual magma chambers that animate the Yellowstone caldera in modern times, scientists reported in a new study.

"This is, for the first time, the numerical look at how magma distributes itself in the crust," said study co-author Ilya Bindeman, a geoscientist at the University of Oregon. [What If the Yellowstone Supervolcano Erupts?]

A long history of Yellowstone

Bindeman's doctoral student Dylan Colón spearheaded the modeling effort. In recent years, geoscientists have imaged the magma under Yellowstone, discovering a magma body that's between 2.5 and 8.7 miles (4 to 14 kilometers) deep and 9 percent melted, and a larger body of melt that's 12.5 to 28 miles deep (20 to 45 km) and 2 percent melted. The two gooey areas are separated by a "sill" of unmelted crust.

To figure out how the underside of Yellowstone got looking this way, Colón, lead author of the study, used "forward modeling," essentially running scenarios over 7 million simulated years to arrive at the current arrangement.

"He was able to choose parameters which were both realistic for Yellowstone and the ones which match geophysical observations and also geochemistry," Bindeman told Live Science.

Given that the models match reality from all these angles, Bindeman said, "we think this is what is going on under Yellowstone." [Yellowstone and Yosemite: Photos of Two of the World's Oldest National Parks]

The crust over the Yellowstone plume moves about 0.8 inches (2 centimeters) a year as the North American tectonic plate shifts, Bindeman said. This creates a sort of conveyer-belt effect in which the plume has caused eruptions in a slowly advancing line over millions of years — a line visible in today's topography as the Snake River Plain. According to the new model, described April 16 in the journal Geophysical Research Letters, the head of the plume hit the crust about 6.75 million years ago, pushing melting basalts (a type of magma) into the crust. The two zones of melt formed after another 1.25 million years.

The findings also suggest that the magma plume is 315 degrees Fahrenheit (175 degrees Celsius) hotter than the surrounding mantle. Colón is now working on a paper about the geochemistry of the model, Bindeman said.

The geochemistry is important, Bindeman said, because Yellowstone's magma is bizarre. It's particularly depleted in the isotope oxygen-18, or atoms of oxygen with 10 neutrons rather than the normal eight in their nuclei. Researchers know that this depletion has to do with the way the hydrothermal system of geysers and hot springs at Yellowstone interacts with the crust, which then feeds into the magma system, creating oxygen-18-depleted magma. But it's hard to explain how this actually happens, Bindeman said, making the depleted oxygen-18 one of the "most enigmatic geochemical signatures of the plume."

"This modeling tells you with maybe half a kilometer [about a third of a mile] resolution where the magma is and what is the composition of this magma, how much magma, etc.," he said. With additional detail, the model could help predict the eruptive potential of that magma, he added. The last Yellowstone eruption occurred 640,000 years ago.