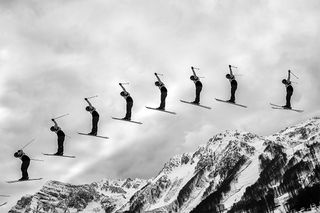 A composite image shows the parabolic path of a skier flying through the air.
(Image: © Benjamin Lowy/Getty)

Consider dropping from the height of a mid-sized building onto hard, packed snow. What would happen to your legs?

Even if you survived, the bones in your legs probably wouldn't. So why doesn't that happen to ski jumpers or, even more astonishingly, freestyle skiers during the "aerials" event?

Here's how the aerials work: Skiers slip at high speed down a steep slope, zip up a ramp and launch themselves — nearly vertically — into the air, tumbling and performing a series of astonishing flips. Then they land on two skis on hard-packed snow and slide to a stop, easy-peasy.

"If you think about when you do a jump — or pretty much any object that we throw or launch into the air — you follow this parabolic trajectory," Gbur told Live Science.It turns out that the trick to landing with your limbs intact is that the aerials jumps and landings aren't perfectly vertical, said Greg Gbur, a professor of physics at the University of North Carolina at Charlotte.

"You design the [landing] ramp so that the skiers coming down are basically coming down on a ramp that follows that parabolic trajectory," Gbur said. "When they're first landing, they're more or less going in the same direction that gravity wants to take them."

If you fell straight down, the hard ground would stop your fall all at once. The intense force of that brutal deceleration, distributed unevenly across your body, would smash it to bits.

But landing on the ramp, while likely not gentle, involves a much slower change in momentum for the skiers.

"The ramp is sort of following the same path that they're already going, so they take the impact gradually, as the curve of the slope gradually becomes level," Gbur said.