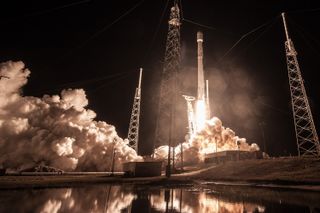 It's been perhaps the weirdest week of news and mysteries in the history of private spaceflight. And it's ending in a swirl of confusion at the Pentagon — fueled in part by whispers of spaceplanes, experimental vehicles, and the CIA.

Here's how things got to this point. (If you're caught up on this story, scroll down for the new stuff.)

On Sunday night (Jan. 7), as Live Science previously reported, a long-delayed, classified SpaceX mission, codenamed Zuma, finally took off carrying its mysterious Northrop Grumman payload. The launch appeared to go well, but sometime after SpaceX turned off the cameras on its Falcon 9 rocket — standard procedure before deploying a classified payload — something appears to have gone haywire.

Early indicators suggested Zuma, initially presumed to be some sort of spy satellite, completed a successful orbit. But Bloomberg and Wall Street Journal reports posted Monday (Jan. 8) — later backed up and elaborated by ABC News Tuesday evening (Jan. 9) — suggested Zuma, which the Journal reported cost more than a billion dollars, was lost in space. ABC reported it plummeted into the Indian Ocean.

Then SpaceX President and COO Gwynne Shotwell told The Verge Tuesday, "For clarity: after review of all data to date, Falcon 9 did everything correctly on Sunday night,"

Her statement strongly implied, as Loren Grush of the The Verge first pointed out, that from SpaceX's perspective whatever may have gone wrong was someone else's fault — likely Northrop Grumman's.

All that baggage landed in the Pentagon's media briefing room Thursday (Jan. 11), when reporters asked top Defense Department spokeperson Dana White to explain just what had gone on with Zuma.

“I would have to refer you to SpaceX, who conducted the launch,” White said, as SpaceNews reported.

As Spacenews writer Sandra Erwin pointed out in her article this is pretty unusual.

"When a big-ticket military weapon development or procurement goes off the rails for any reason, the Pentagon as a rule does not deflect media questions to the contractor that the government hired to do the work," Erwin wrote.

The scale of the project, and scale of the public resources it sucks up, obligate the Defense Department to share at least some details.

And yet White refused to elaborate on Zuma, despite repeated questioning from the reporters in the room, citing the classified nature of the mission.

SpaceNews — citing unnamed sources who levels of insider knowledge and expertise were not specified in the article — offered possible explanations for the Pentagon's tight lips:

The Department of Defense might not be involved at all

It's natural to assume that a classified space mission would involve either the Defense Department or National Reconnaissance Office (NRO) — an intelligence agency reporting to the Secretary of Defense that handles spy satellites. And if either were involved, SpaceNews wrote, the Pentagon would likely comment.

But it's possible Zuma was a classified mission organized entirely between SpaceX and a defense contractor, like Northrop Grumman, possibly to test some technology as part of an ongoing classified project.

It's also possible that the satellite belonged to the CIA, SpaceNews reports, which does not answer to the Pentagon and — according to a quote from SpaceNews' unnamed source — "from what I've heard [it] has been known to do its own thing on occasion."

In addition to the possibility that Zuma was not a Defense project, it may not have been a spy satellite at all.

"Conceivably it could have been a spaceplane or some experimental vehicle," SpaceNews reported.

In that case, it might not have been intended to remain in orbit at all, instead de-orbiting as part of its test.

How Seriously Should You Take All This?

At this point, in this reporter's judgement, the most plausible explanation for Zuma's apparent disappearance is that Northrop Grumman built something, stuck it on a SpaceX rocket, and when it arrived in space it didn't work.

But the sheer weirdness of the Pentagon's behavior has been enough to convince veteran space reporters that something deeply weird is afoot here. And if it's deeply weird space speculation o'clock, why not wonder about strange experimental vehicles (or weapons for that matter).

It's important to realize though that SpaceNews, the reputable publication which appears to be farthest out on a limb in its Zuma reporting, is citing an unknown number of unknown sources, who themselves appear to be making educated guesses based on past expertise, rather than sharing insider knowledge of the Zuma mission.

What happened with Zuma? The full story may never come out in this lifetime.