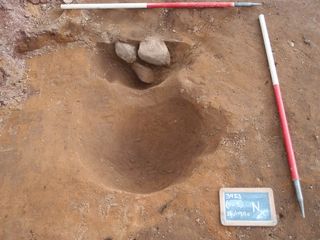 The remains of the Roman oven at Camelon in Scotland.
(Image: © Copyright GUARD Archaeology Ltd.)

An ancient Roman oven has sat undisturbed for the past 2,000 years in Scotland, and curiously, it looks as though it's never been used, according to a new report.

Roman ovens — which are composed of two interconnecting pits in the ground that together resemble a dug-out figure 8 — are usually covered with charcoal and ash left after cooking, the archaeologists said. The newfound oven also has these two pits, but it doesn't have any charcoal layers or scorching within it, said Maureen Kilpatrick, an archaeologist with GUARD Archaeology, a company based in Glasgow, Scotland.

"Unfortunately no ashy material was found in either of the pits, but the double-pit [shape] is very similar to other bread ovens which have been found on Roman military sites in Scotland," Kilpatrick told Live Science in an email. [In Photos: Ancient Roman Fort Discovered]

Without more evidence, it's difficult to determine whether the two pits formed an oven, Kilpatrick said. However, one of the pits had stones within it, suggesting that the pits could have been used as part of a stone oven, she said. Perhaps there were more stones in the pits at one time, Kilpatrick added.

"[Rocks] are portable," she said. "Maybe they just moved them."

The archaeologists found a number of other artifacts during the dig, which was part of a 2014 excavation near Falkirk, a town in the central lowlands of Scotland. The excavation was required before a retail center could be built there, Kilpatrick said. Earlier digs in the Camelon area had uncovered Roman forts, and the new site appeared to be an annex of one of those forts, the researchers said.

In all, they found 21 iron artifacts, including a socketed bolt head, an ox goad and a dozen hobnails — nails used to hold Roman shoes together. They also found ironworking slag at the site, she said.

"The socketed bolt head is a type commonly recovered from Roman military sites," Kilpatrick said. "It is proposed that they may have been practice ballista bolt heads, as their blunt head would have made them easier to extract from targets and re-use during the frequent training, which must have taken place (and also less deadly should they miss the target)."

In contrast, the ox goad has a spiraled shape with a protruding point. "Such artifacts are thought to have been used on the end of a wooden shaft to control oxen pulling a plough," Kilpatrick said. "They tend to be Roman in date, though isolated Iron Age examples are also known in southern Britain."

As for the hobnails, traces of mineralized leather suggest that they were still within the leather confines of a shoe when they were left behind, she said. "However, none of the hobnails are corroded together," suggesting they came from different shoes, "rather than the result of whole sandals or boots being deposited," she said.

Much of the waste from the site was found in a pit that contained pottery pieces dating to the first century A.D., with a radiocarbon date between 41 B.C. and A.D. 116, the researchers found. [Photos: Mosaic Glass Dishes and Bronze Jugs from Roman England]

"The findings highlight that the annexes of Roman forts were not just for the military," Kilpatrick said. "Many civilians would have worked and traded within their confines."

The report was published in August in the journal Archaeology Reports Online.