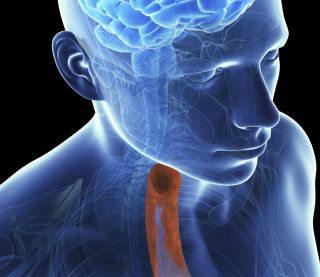 In the United States, cases are on the rise for a condition that causes the esophagus to gradually swell, increasing the risk of choking. The condition is called eosinophilic esophagitis, or EoE, and while experts aren't sure what causes it, doctors at The Ohio State University Wexner Medical Center believe it may be triggered by a combination of food and environmental allergies.
(Image: © The Ohio University Wexler Medical Center)

Imagine sitting down to a meal, only to end up in the emergency department. This is a possibility for an increasing number of Americans who suffer from a mysterious condition in the esophagus that makes it hard to swallow.

The condition is called eosinophilic esophagitis (EoE), and while physicians like myself are learning more about it everyday, the cause remains unknown, and incidence continues to increase in the United States.

Most cases of EoE are connected to food allergies, so treatment and management includes tests to identify the allergen, elimination diets (where all foods suspected of causing problems are excluded and then reintroduced in a controlled manner), and medications. In most cases, the problems are triggered by the eight foods that cause about 90 percent of all food allergies in the United States: peanuts, tree nuts, cow's milk, eggs, wheat, soy, fish and shellfish. However, sometimes symptoms are seasonal and related to pollen that easily gets inhaled and swallowed.

One aspect that makes this condition difficult to diagnose is that in most cases, the reaction and swelling is a gradual process. In fact, as an allergist at The Ohio State University Wexner Medical Center, I've seen that EoE can affect people who aren't aware they have allergies. This means that patients might be eating foods that cause eosinophils to build up in their esophagus without knowing it. Over time, they can develop enough inflammation that they start having symptoms, including trouble swallowing and abdominal pain during or after meals.

Depending on age, symptoms can vary. For instance, children with EoE can have trouble leading a normal life, complaining of stomach pain or refusing to eat, vomiting frequently or having difficulty with meeting growth milestones.

For adults and teens with EoE, symptoms can include difficulty swallowing, sometimes to the point that food gets stuck in the esophagus, forcing a trip to the emergency room. Patients can also experience chest pain or persistent heartburn that can't be relieved by medication.

To treat EoE, we try to identify and eliminate the allergen. We also prescribe inhalers as topical steroids that can be used to coat the throat and reduce inflammation. If these treatments don't work as well as we'd like, we might suggest dilation to help improve swallowing.

A decade ago, there were only a handful of documented cases of EoE. Today, data suggest the condition affects one in every 2,000 Americans. It's likely this number is actually much greater, as it often goes undiagnosed. While this might be the first time you've heard of EoE, we as allergy specialists are finding this is becoming a more common way for people's bodies to respond to allergy triggers.

As the incidence of this condition grows, it's crucial to close the knowledge gap in the medical community. At Ohio State University's Wexner Medical Center, our researchers are studying eosinophils to learn more about their effects related to allergies. We're also partnering with scientists at Nationwide Children's Hospital to test whether vitamin D levels influence susceptibility to EoE, and to identify the most common triggers associated with the disease.