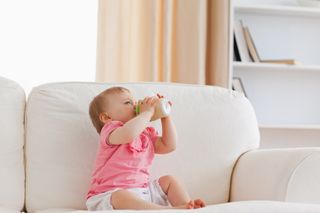 Harmless-looking bottles, pacifiers and sippy cups are associated with a significant number of injuries in infants and toddlers, a new study finds.

Researchers looked at a database of hospital records, and found 45,000 cases of children under age 3 being treated in emergency rooms for injuries related to using these products between 1991 and 2010.

The biggest cause of injuries was falls — in 86 percent of the cases, children were hurt when they fell, often while holding a bottle in their mouth.

"Virtually every infant has one or more of these products," said study leader Sarah Keim, a researcher at Nationwide Children's Hospital in Columbus, Ohio.

Children around age 1 were the most likely to be hurt, Keim said.

"Kids of this age are just learning how to walk and run, and they're unsteady on their feet, so there's a lot of tripping and falling," she said. Younger children are less mobile; older children tend to be steadier on their feet.

Parents could prevent injuries by weaning children off  pacifiers between the time they are 6 months old and when they begin walking, Keim said. It would also help to follow the recommendation of the American Academy of Pediatrics to transition children from sippy cups to regular cups around age 1.

Getting children to drink from a regular cup, instead of a sippy cup, can be tricky, so most parents make sure their child is seated, which may also help prevent injuries, Keim said.

Keim and her colleagues used data from the National Electronic Injury Surveillance System, which is operated by the U.S. Consumer Products Safety Commission. The data are collected from about 100 hospitals, and weighted to find national injury estimates.

The data showed that 83 percent of falls resulted in lacerations or contusions to the mouth and face, and bottles were involved in 65.8 percent of the injuries. There were fewer injuries from pacifiers (19.9 percent) and sippy cups (14.3 percent).

The researchers noted a decrease in injuries over time. There were about 30 percent fewer cases in 2010 than in 1991. While the exact reason for the drop isn't known, the trend seems to be driven by a reduction in injuries from bottles, the researchers said. It could be that fewer children used bottles over time because they transitioned to sippy cups or regular cups earlier, or because more children were breast-fed, or breast-fed longer.

In most cases, the injuried children didn't need to be hospitalized. "These are not as severe as other injuries that could happen," Keim said. "But these are really preventable."