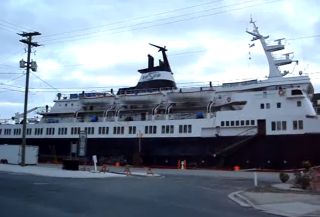 The Lyubov Orlova (shown here) was seized in St. John's, Newfoundland, in 2010 because of a financial dispute between the ship's Russian owners and a charter company.
(Image: © YouTube Screengrab)

After months of drifting across the North Atlantic, a luckless, abandoned cruise ship spotted drifting off the coast of Ireland may have finally sunk beneath the waves.

The Lyubov Orlova, a 328-foot-long (100 meters) vessel named after a Russian screen siren from the 1930s, was built in 1976 and chartered for expeditions to polar waters.

But after the ship was abandoned in 2010 in Newfoundland, Canada, the Lyubov Orlova was sold for scrap to an outfit in the Dominican Republic, Phys.org reports. [Disasters at Sea: 6 Deadliest Shipwrecks]

While the ship was being towed to its Caribbean destination in January 2013, the towline snapped in rough seas and the crew was unable to reconnect the line, leaving the ship to drift eastward across the Atlantic Ocean.

With no crew, no warning lights and no GPS system, the ship appeared doomed. But in February, the ship was spotted by the Atlantic Hawk, an oil industry supply ship, which managed to attach a towline.

Transport Canada, however, ordered the Atlantic Hawk to release the vessel since it was by then in international waters and no longer under Canadian jurisdiction.

Months passed with no sign of the Lyubov Orlova until it was spotted by the U.S. National Geospatial-Intelligence Agency, a Defense Department mapping service, drifting some 1,300 nautical miles (2,400 kilometers) west of the Irish coast, Gizmodo reports.

The ship hasn't been seen in months, and some speculate it may have finally sunk.

The star-crossed ship hasn't had an easy life: In 2006, it ran aground off Antarctica and had to be towed to safety by a Spanish icebreaker.

The Lyubov Orlova was seized in St. John's, Newfoundland, in 2010 because of a financial dispute between the ship's Russian owners and a charter company. The crew, bereft with no pay and nothing to eat, were forced to rely on food donations from Canadians for several months before returning to Russia.

"In case of a collision or sinking or any accident, the Lyubov Orlova will immediately release fuel … other toxic liquids, asbestos ... mercury and other non-degradable floating waste," the group declared in a statement.

The Irish Coastguard received a signal in March from the emergency position-indicating radio beacon (EPIRB) of the Lyubov Orlova. An EPIRB is activated when it contacts water, the Irish Examiner reports.