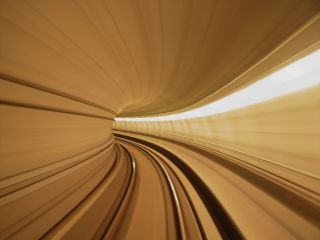 Photons have a ticket to travel at light speed
(Image: © Willem Dijkstra, Shutterstock)

Unless the basic principles of the universe discovered by Einstein are proven wrong, which hardly any physicist would expect, the short answer is "no." But astrophysicists have recently discovered gas and dust in two distant exploding stars moving at 99.9997 percent of the speed of light — about 2,000 mph too slow to make the cut. When a super-massive star explodes, sometimes called a hypernova, it jettisons gas and dust into space with astonishing energy, in effect causing it to outshine most objects in the nearby universe. In the recently discovered explosions, about 200 Earth’s worth of material, in the form of stellar gas and dust, was propelled near the light-speed brink for a few moments. Such a large amount of matter moving so quickly may seem extremely close to light speed, but the energy required to move even a little faster is nearly infinite. To understand this, Einstein’s famous E=mc2 equation is useful. But there's a more complex version, however, which accounts for velocity (v):

If the equation looks confusing, here’s a summary: The faster an object moves, an exponentially larger amount of energy is needed to speed it up, which is why travelling at light speed requires an infinite—and impossible—amount of energy. So unless you’re a photon, there’s a fat chance you’ll be matching the universe’s speed record any time soon.