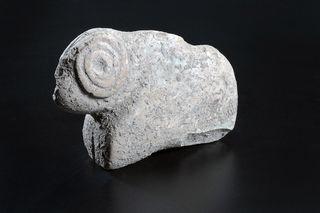 This limestone figurine of a ram, found in Israel, is about 9,500 years old.
(Image: © Yael Yolovitch, courtesy of the Israel Antiquities Authority)

Found at the Tel Moza archaeological site, one of the Neolithic figures is a limestone ram with precisely carved spiral horns. "The sculpting is extraordinary and precisely depicts details of the anima's image," the IAA excavators said in a statement about the ram, adding that "the head and the horns protrude in front of the body and their proportions are extremely accurate." The other is a more abstract sculpture of a wild bovine fashioned from dolomite, according to the IAA. Both are about 6 inches (15 centimeters) long.

Archaeologists believe these objects might have had cultic importance for the people who created them.

The animal figurines were found near the remains of an ancient round building, dating back to a dynamic time in the region's history when humans were transitioning from a hunter-gatherer lifestyle to one of farming and settling in villages. [Photos of the Figurines]

"It is known that hunting was the major activity in this period," Hamoudi Khalaily, co-excavator of the site for the IAA, said in a statement. "Presumably, the figurines served as good-luck statues for ensuring the success of the hunt and might have been the focus of a traditional ceremony the hunters performed before going out into the field to pursue their prey."

Khalaily added that the archaeological evidence from this time period, called the Pre-Pottery Neolithic B, including these animal figurines, "teaches us about the religious life, the worship and the beliefs of Neolithic society.

Excavations at Tel Moza are taking place ahead of the expansion of Highway 1, the main road connecting Jerusalem and Tel Aviv.