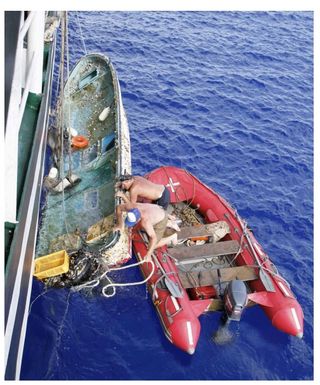 Hoisting up to Pallada the Japanese boat registered to Fukushima prefecture and, presumably, washed into the ocean during the March 11 tsunami.
(Image: © Pallada.)

A new animation shows the path of the debris carried out to sea by last year's massive tsunami in Japan.

The tsunami triggered by the devastating earthquake that struck off the east coast of Japan on March 11, 2011,produced an estimated 25 million tons of debris. Much of this debris was swept out into the Pacific Ocean as the waters retreated.

The new animation shows its probable path, which is helpful to shipping traffic since some of the debris is dangerously large. Debris-tracking missions have already found two fishing vessels that were carried out to sea by the tsunami.

Since that magnitude 9.0 quake, the debris that has stayed afloat has drifted apart due to winds and ocean currents, with most of it moving eastward. Scientists have predicted the debris could wash up along the West Coast of the United States by next year.It is expected to hit Midway Atoll this winter and the main Hawaiian Islands in the winter of 2012-2013.

All is clear at the Midway Atoll so far this winter, though. The ocean currents have kept any debris away, said Jan Hafner of the International Pacific Research Center, who is part of the team that modeled the debris path.

"The currents are changing constantly and we expect the tsunami debris to reach there soon," Hafner told OurAmazingPlanet.

The debris has dispersed and is not visible by satellites, so scientists deployed hundreds of high-tech devices to help monitor the path of the debris, which could be hazardous to ships, marine life and coastlines.

Identifying debris A few big pieces of debris have turned up. At the end of September 2011, a Russian ship reported the edge of the debris field 250 miles (400 kilometers) northwest of Midway. About 100 miles (161 km) farther on, the ship found a 20-foot-long (6 meters) boat from Fukushima, which was identified by its markings.

Along the West Coast of North America, news reports have suggested that debris is already arriving. Debris from Asia, however, routinely washes up here, so scientists are cautious before confirming any debris they find is from the tsunami.

"If an unusually large amount of unusual types of debris washes on a beach, that is an indication of debris from the tsunami," Hafner said.

One of the fishing vessels had markings on the wheelhouse of the boat that showed its homeport to be in Fukushima Prefecture, the area hardest hit by the massive tsunami.

The U.S. National Oceanic and Atmospheric Administration (NOAA) has urged anyone that spots potential tsunami debris to report it by emailing DisasterDebris@noaa.gov.