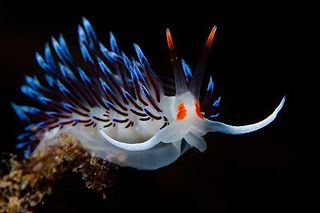 A photo of a bright nudibranch, one of the 2011 contest winners.
(Image: © Jordi Benitez, Spain.)

Shutterbugs, get out your (waterproof) cameras. The University of Miami's Rosenstiel School of Marine & Atmospheric Science is now accepting entries for its annual underwater-photo contest, which offers up some tempting prizes.

Now in its eighth year, the contest is open to anyone with an eye for capturing the ocean's underwater wonders — and who earns no more than 20 percent of their income from photography.

And this year, the public can have a say. The school has set up a "fan favorite" category, which allows users to vote online for their favorite image.

A fleeting encounter of two translucent goby fish, which are no bigger than an inch, snapped during a dive off Egypt's coast took the top prize in 2011.

The school is offering a cruise through the Bahamas to a grand-prize winner, and cash prizes for the top three photographs in all five categories.

Entrants can submit photographs until midnight Sunday, March 25. Winners will be announced April 18. You can click here to enter.