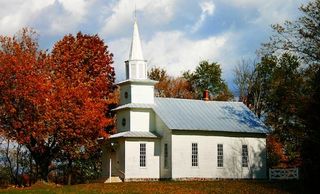 All those cake raffles, picnics and coffee-and-donut meetings haven't earned churches the reputation as bastions of healthy living. But a new survey of religious leaders across the country found that a healthy pastor may lead his or her congregation toward better health.

Researchers from the University of Rhode Island and Pennsylvania State sent online surveys to more than 13,000 faith leaders across the United States. Pastors, ministers and rabbis who participated described their congregations' demographics and the wellness initiatives, as well as their own health habits and body mass index (BMI).

The survey found the healthier the pastor or reverend, the more likely that their organization ran health initiatives such as cancer screenings or exercise programs, or handed out health-related educational pamphlets.

The country's health could be greatly improved "if [church] was a place where health became the norm," said Melissa Bopp, an assistant professor at Pennsylvania State University and lead author of the study published Oct. 7 in Health Education Research.

"If you didn't have the macaroni and cheese or fried chicken at the church picnic, people would still eat, it would just be easier for them to make a healthy choice," Bopp said.

Religious groups play a large role in many American homes. A recent survey from the Pew Research Center showed 40 percent of people in the United States attend religious ceremonies one or more times a week.

"I think that the church is a significant community organization in this country," Bopp said.

When all of the church softball teams and health fairs were added up, the researchers found the congregations in the study ran an average of five health-related initiatives a year — some doing none, and others as many as 13.

Methodist and Lutheran churches in the study hosted more health activities than Catholics, Baptist or United Church of Christ congregations.

However, as a result of the researchers' approach — which targeted the three most common denominations each state — not every religious group was well-represented. The final results, tallied from the 844 religious leaders who responded to the survey, included just five Jewish congregations and three pastors from the Church of the Nazarene. And the majority of the responders hailed from the Midwest.

Bopp said she hopes future studies will include non-Christian communities, and more regions of the United States.

"That is really one of the limitations that went along with it [the study]," said Bopp. "It's a great idea for our next step: to examine regional differences."

Still, it was helpful to learn that the health of a pastor was linked to the number of health activities done at the church.

"I was really surprised at the strength of the association," Bopp said. "I thought that was really exciting because that gives us another place were we can potentially create health promotion programs – targeting the pastor and their health."

Despite the study's limitations, the survey went further than most studies available on the topic, said Teresa Cutts, director of research for innovation at Methodist LeBonheur Health Care in Memphis, Tenn.

"It was a very useful effort to survey a population that's not often surveyed in a meaningful way. And it was an objective way to survey faith communities in terms of their health and wellness activities," said Cutts, also of LeBonheur's Center of Excellence in Faith and Health.

Larger churches, churches in urban areas and those described as "somewhat" diverse by their leaders often ran more health programs than smaller, and more uniformly-white or uniformly-minority churches, said Bopp.

"We look at the church-level variables as something that, a lot of times, we really can't modify," Bopp said.

However, Cutts said that church size, location and other seemingly unchangeable factors can be overcome. LeBonheur runs a network of 381 congregations, mostly small Baptist or Church of God in Christ denominations.

"What we found is that pulling together a network of those churches overcomes the problems that you see in terms of smaller churches having limited resources," Cutts said. In her experience, Cutts said long-term partnerships, in which hospitals work with churches to develop programs the churches want to initiate, are quite effective.

"It's not a matter of outreach, it's a matter of being on the ground, and being familiar," said Cutts, who organizes a team of "navigators" from local congregations who sign up members of their church for health-related initiatives.

"People trust people they see in church," Cutts said. "It's all about leveraging and aligning raw trust."

Pass it on: Religious leaders could improve the health of their congregations. This story was provided by MyHealthNewsDaily, a sister site to LiveScience. Follow MyHealthNewsDaily on Twitter @MyHealth_MHND. Find us on Facebook.